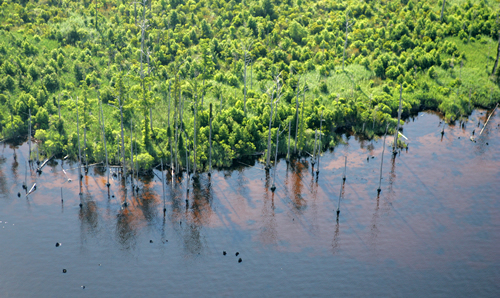 USA - Saltwater Invasion: Driven by Rising Seas, the Threats to Drinking Water, Crops From Saltwater Are Growing in Maryland and Elsewhere in the U.S.

On Louisiana’s Gulf coast, hit by a record five hurricanes or tropical storms this year, Native American tribes are some of North America’s early climate refugees as seas claim their shoreline and salinity damages the land that remains.

Four Louisiana tribes requested United Nations assistance this year to force action by the U.S. government. They wrote in a formal complaint citing “climate-forced displacement” that saltwater has poisoned their land, their crops and their medicinal plants.

“That strips us of not only being able to generate an income to provide for ourselves, it also strips us of our ability to feed ourselves healthy,” Shirell Parfait-Dardar, chief of the Grand Caillou/Dulac Band of Biloxi-Chitimacha-Choctaw, said in an interview.

The cascading consequences of saltwater intrusion were starkly revealed in interviews with more than 100 researchers, planners and coastal residents, along with soil testing and analyses of well-sample data conducted by the Howard Center for Investigative Journalism.