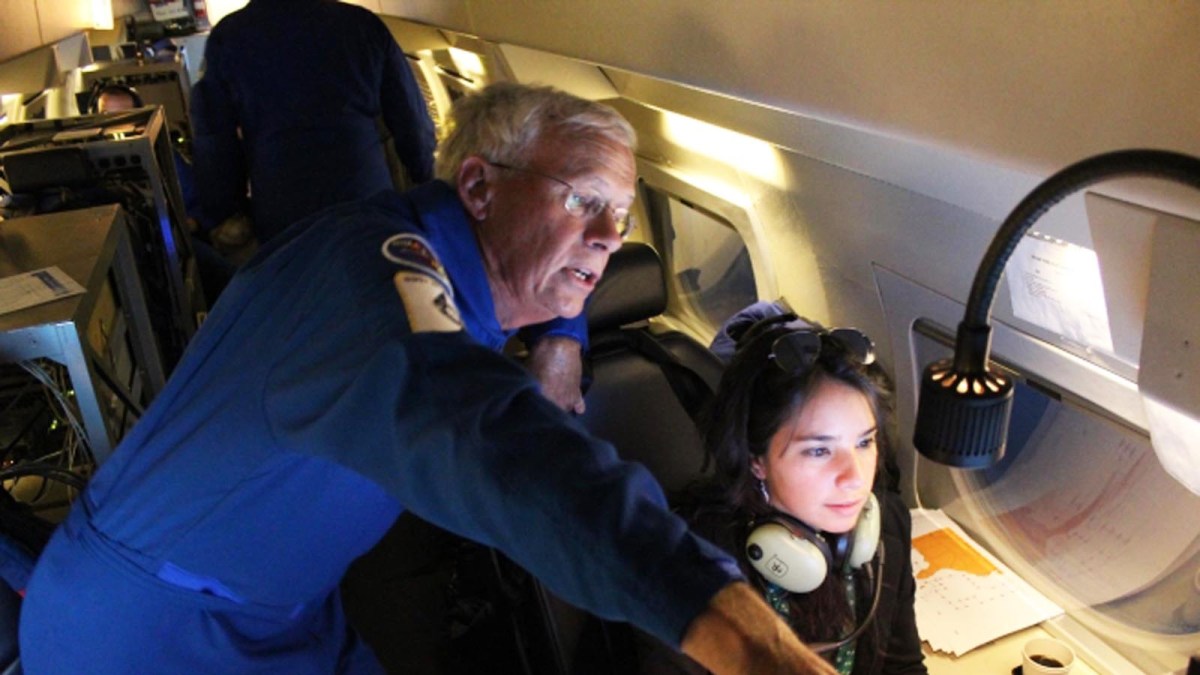 During a remarkable hurricane hunting career spanning 42 years, over 80 hurricanes, and 659 penetrations into hurricane eyes, NOAA meteorologist Jack Parrish retires this week. Perhaps no other meteorologist alive has seen more exceptional weather and worked with more top weather scientists than Mr. Parrish, and he has some great stories to tell.

After serving as a radar operator and navigator aboard oceangoing Coast Guard cutters for four years, Jack earned a BS degree in Meteorology from Florida State University in 1980. That year, he joined the NOAA Hurricane Research Division (HRD) in Miami, flying as a radar scientist on NOAA’s pair of P-3 Orion hurricane hunter aircraft, NOAA 42 and NOAA 43. In 1983, he joined NOAA’s Aircraft Operations Center as a flight director for the P-3s.

When I joined the NOAA Hurricane Hunters in 1986, Jack was the flight director who trained me on my first project (a severe thunderstorm project led by legendary tornado scientist T. Theodore Fujita), and on my first hurricane hunter flight, into Cat 1 Hurricane Bonnie off the Texas coast. When NOAA added a high-altitude jet (a Gulfstream IV-SP) to its fleet in the 1990s, Jack became a project manager for field studies involving the jet. He took the time recently to relate some of the stories from his remarkable career, and to share his photos.

So to begin, Jack, tell us what were the first and last hurricanes that you flew through?

Wow! That’s a pretty auspicious start to a career with the hurricane hunters: flying into Hurricane Allen. Allen still holds the record for the strongest Atlantic hurricane ever measured, with 190 mph sustained winds (two days after your first flight into it). So, what was your roughest flight?

Without a doubt, my second hurricane flight, again into Cat 4 Allen, on 8/6/1980. Those were the days when we flew any intensity hurricane as low as 1,500 feet, again because that’s what the science (NHC, HRD) requested. Typically, we only sought safer, higher altitudes when the experience just was too rough lower. In those days I was working for HRD and training as a radar meteorologist on the P-3s, flying at Station 4 on the left side of the aircraft. That day, we were flying reconnaissance for NHC. The first pass, east to west, between the south Cuban coast and Jamaica, was quite unpleasant in the two eyewalls, but the max turbulence and zero-G events were limited to the eyewall passes (perpendicular to the banding), so they were mercifully brief. So far so good. But the next pass, south to north, was memorable for life. The center of circulation we NOAA flight directors always navigate to when ‘fixing’ the storm was unfortunately tucked up against the northwest eyewall, and we had to turn more to the west to find the center. By now the eye character had become asymmetric, meaning almost no eyewall on the south side, and not much turbulence there. But on the north side, at least on radar, it was Dante’s Inferno ahead.

I think it would have been really bad, but short-lived, if we had continued turning to the west and just exited to the west, and then realigned the pattern. But instead, we marked the center and in the last calm moments, turned north again, sliding into the northwestern eyewall. For the next about 20-25 minutes, complete bedlam! In crawling north in the western eyewall, we had about 120 knots of headwind, so our relative (ground) speed exiting that environment was probably only about 90-100 knots. And then, even with C-band radars in the nose and lower fuselage, we learned a lot about extreme attenuation in rainfall so heavy, as new convective bands were repeatedly appearing on radar once we had made it almost clear of the current one. It was simply a rapid-succession roller-coaster of ups, downs, and sideways. No drawers stayed closed, things we thought were tied down securely were not, documents flew about and ended up in the passageways; it was difficult to see the displays due to eyeball jitter, and impossible to hit any buttons to optimize displays. My trainer Pete Wirfel, flying outboard at Station 4, was horrified at the oscillation he saw between the number 1 and 2 engines on the left wing, and he closed the window flap so he wouldn’t have to see it anymore.

It seemed to go on forever. When we finally made it to the north side of the pattern and turned to the southwest, it took something like an hour to clean up the aircraft so we could continue the mission. We finished the reconnaissance pattern at 10,000 feet (a much calmer penetration in that case), before returning to Miami. Inspection of the aircraft indicated no excessive strains or bent metal – a real testament to Lockheed engineers for sure.

Yikes! Was that also the most memorable hurricane flight that you were on?

As awful as the 8/6/1980 mission was on NOAA 42, the most memorable was on 9/25/1987, when Cat 3 Hurricane Emily was about to make landfall on the south coast of Hispaniola. It was a multi-aircraft eye penetration-fest, flying through a red-hot eyewall as many times as was safely possible. We were flying at 12,000 feet; NOAA 43 was at 10,000 feet or lower. The flying was all in the eyewall that day, with very intense updrafts and downdrafts. We made 10 passes flying ‘pie-wedges’, generally in the northern quadrants, then sampled the high cirrus clouds with our microphysics instruments before returning to the eyewall intensive for another nine eye penetrations. I recall the NOAA 43 pilots becoming alarmed at the vibrations while flying through the eyewall at 10,000 feet, so we quickly ascended to about 17,000 feet so they could come up to 15,000 feet. Talk about a fast repositioning! Pilot Dave Turner gave them a cushion in a hurry, since he heard their concern over the radio, and we were instantly on the way up.

The ice must have been very abusive; we abraded numerous holes in the radomes and leading edges, and Flight Engineer Butch Moore had to replace two oil coolers (like engine radiators) before NOAA 42 could bring us home from San Juan. It was the most memorable because I’ve never seen a flying crew so focused and responsive to the changing terrible stuff on radar; I also learned that day something about what we could do, versus perhaps what we should do, for science.