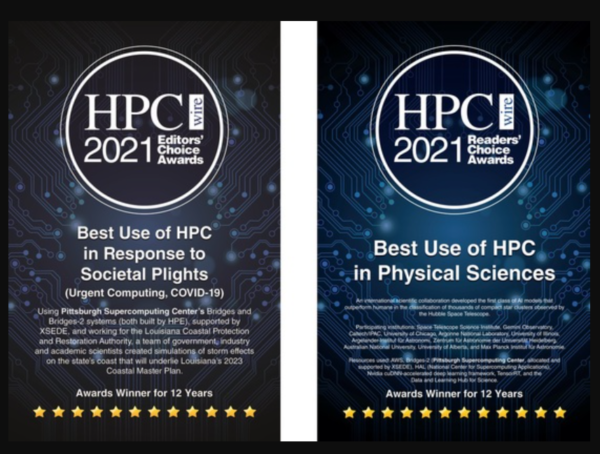 Recognized by an Editors’ Choice Award, scientists working for the state of Louisiana used PSC’s Bridges and Bridges-2 to simulate the impact of storms on the state’s coastal regions. The other, Readers’ Choice Award, cited an international team that used Bridges-2, among other systems, in an artificial-intelligence approach toward rapid classification of mysterious collections of stars called compact clusters.

“Our team is very proud to support the amazing and impactful accomplishments that led to these awards,” said Shawn Brown, director of PSC. It is the twelfth year PSC has been so recognized.

The list of winners was revealed at the HPCwire booth at the event, and on the HPCwire website, located at www.HPCwire.com. PSC was recognized with:

Editors’ Choice: Best Use of HPC in Response to Societal Plights: Working for the Louisiana Coastal Protection and Restoration Authority, a team of government, industry and academic scientists used PSC’s now-retired Bridges and its current flagship system Bridges-2 to create simulations of storm effects on the Louisiana coast, launching a series of simulations that will underlie the state’s upcoming 2023 Coastal Master Plan. State decision makers will use the results of these simulations to assess cost versus benefit for risk reduction and restoration projects, minimizing the effects of coastal storms on both humans and the environment with the most economic use of taxpayer dollars.

Readers’ Choice: Best Use of HPC in Physical Sciences: An international scientific collaboration developed the first class of artificial-intelligence models that outperforms humans in the classification of thousands of compact star clusters observed by the Hubble Space Telescope. The work, which employed Bridges-2 among other systems, will greatly accelerate astronomers’ ability to analyze and understand these mysterious collections of stars and how they formed, shedding light on the evolution of galaxies and the Universe.

The coveted annual HPCwire Readers’ and Editors’ Choice Awards are determined through a nomination and voting process with the global HPCwire community, as well as selections from the HPCwire editors. The awards are an annual feature of the publication and constitute prestigious recognition from the HPC community and are revealed each year to kick off the annual supercomputing conference, which showcases high performance computing, networking, storage and data analysis.

“Every year it is our pleasure to connect with and honor the HPC community through our Readers’ and Editors’ Choice Awards, and 2021 marked an exceptional showing of industry innovation,” said Tom Tabor, CEO of Tabor Communications, publisher of HPCwire. “Between our worldwide readership of HPC experts and an unparalleled panel of editors, the Readers’ and Editors’ Choice Awards represent resounding recognition throughout the industry. Our congratulations go out to all of the winners.”