Coastwide
The oil rig Deepwater Horizon on April 21, 2010, in the Gulf of Mexico off the coast of Louisiana. (Photo: U.S. Coast Guard via Getty Images) 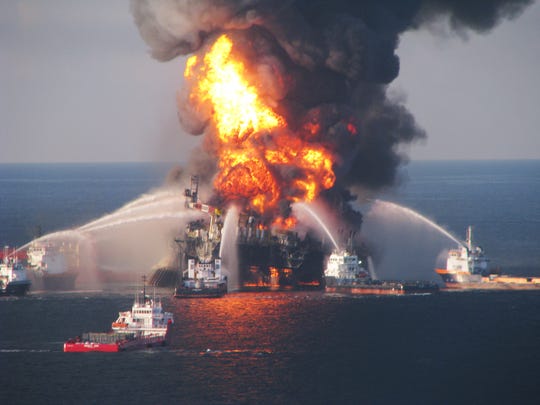 USA - OPINION A pause on offshore drilling is a good first step. Let’s make it permanent.

President Joe Biden hit the ground sprinting on his first day of office. On day one he rejoined the Paris Agreement, and now he has announced a pause on offshore oil and gas leasing. It’s exciting to hear the president’s plan to return science to policy decision-making, even advancing his science adviser to a cabinet-level position. These encouraging moves will certainly translate to more effective action on climate.

Oil and gas are killing us. Burning fossil fuels is driving climate change, which is causing a wave of extinction and disasters that devastate property and the environment, and cost human lives. But President Biden has committed to aggressively address the climate crisis, which gives me great hope that we can work together to permanently protect our climate and coasts from offshore oil and gas.

Permanently ending new offshore oil and gas leasing in U.S. waters would prevent the release of a catastrophic amount of greenhouse gas emissions, which are driving ever larger and more intense wildfires, hurricanes and floods. A new report from Oceanaestimates that permanent protection against offshore drilling would prevent 19 billion tons of greenhouse gas emissions and $720 billion in damages to people, property and the environment.

Damage that results from offshore drilling

In addition to the climate impacts, offshore drilling also leads to oil spills. We saw what a spill can do to coastal economies when the BP Deepwater Horizon spewed hundreds of millions of gallons into the Gulf of Mexico in 2010. Today, the likelihood of another catastrophic spill is even greater than it was in 2010. Not only is the industry drilling in deeper waters, but the Trump administration also weakened the too-few safety rules put in place after the BP disaster.

While protecting us from offshore oil and gas drilling, President Biden can also restore and strengthen the drilling safety rules that were weakened by former President Trump,ensuring that any existing drilling operations be subject to robust safety protocols, oversight and financial assurances. Combining this with movement toward clean energy, like environmentally responsible offshore wind, would set us up for success in the journey toward a renewable energy future.