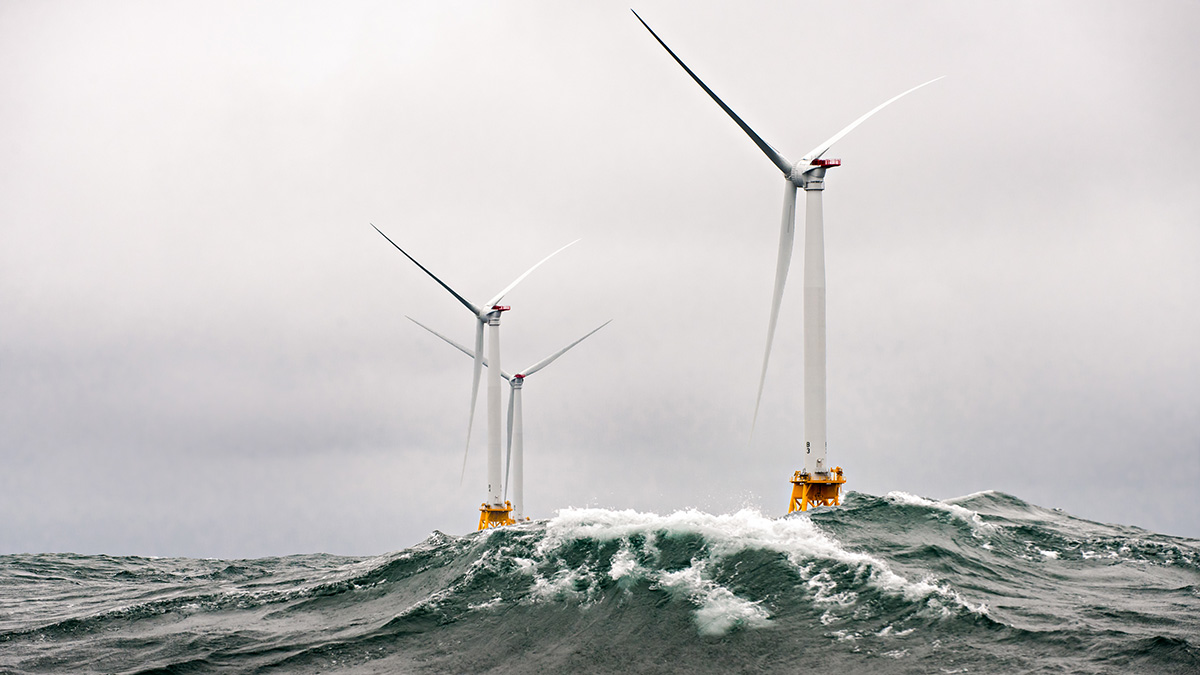 Deep coastal seabeds, glacial erratics, and other geophysical hurdles stand in the way of offshore wind farm proliferation. Researchers, engineers, and organizations are adapting and inventing ways to harness the breeze.

Europe has long embraced offshore wind farms—the first one was built off the coast of Denmark in 1991. More than 5,400 grid-connected turbines in European waters generate around 25 gigawatts, which is more than 70% of the offshore wind power produced globally today.

Offshore wind farms are now gaining traction in the United States, which is currently home to just seven offshore wind turbines and produces 42 megawatts—less than 0.1% of the world’s offshore wind energy. Several commercial-scale facilities are in development in U.S. waters. Earlier this year, the Biden administration set forth a goal of producing 30 gigawatts of offshore wind energy by 2030, and has since announced the plan to develop up to 7 large-scale wind farms along U.S. coasts.

That’s an audacious target, but it’s also an important one: Wind is free and often plentiful, and the energy it supplies can reduce reliance on fossil fuels, which are currently used to produce nearly 60% of the electricity generated in the United States.

A more sustainable future is clearly in sight as offshore wind farms proliferate globally and increase in capacity. But building and operating offshore wind farms come with their own set of challenges, ranging from accurately surveying the seafloor to constructing floating foundations in deep water. These challenges are testing the mettle of scientists and engineers alike, but with the latest report from the Intergovernmental Panel on Climate Change warning that warming will reach 1.5°C by the early 2030s, there’s strong impetus to succeed.

The Many Benefits of Going Offshore

Right now more than 99% of wind farms in the United States are land based. Wind farms on land have significant limitations, the primary one being that 40% of U.S. residents live in coastal counties where space is at a premium.

“You have major population centers on the East Coast that are looking to benefit from the development of renewable energy,” said Darryl François, chief of the engineering and technical review branch for the offshore energy program at the Bureau of Ocean Energy Management (BOEM). “For large, commercial-scale, utility-type projects, you need a lot of open acreage”—that’s tough to find near these metropolitan areas.

And where these wind farms are going, they don’t need roads—that’s good because modern wind turbines can be hundreds of meters in diameter. “Offshore wind turbine components are transported by ships and barges,” said Jocelyn Brown-Saracino, offshore wind lead at the U.S. Department of Energy, “reducing some of the logistical challenges that land-based wind components encounter, such as narrow roadways or tunnels.”

Moving offshore can also sidestep a myriad of state, local, and other jurisdictional regulations and permitting requirements, said François. “You’re working with one landlord, which is the federal government.” (Wind farms lease parts of the Outer Continental Shelf, a vast region generally defined as beginning 3 nautical miles offshore and extending to 200 nautical miles, from BOEM, an agency of the U.S. Department of the Interior.)

All of the sites leased for offshore wind farms in the United States have thus far been located on the Atlantic coast. (Two, the Coastal Virginia Offshore Wind project and Rhode Island’s Block Island, have been developed with wind farms and have a combined capacity of 42 megawatts—sufficient to power roughly 20,000 homes.) Leasing the Atlantic continental shelf is not surprising given the bathymetry of the area, said Anthony Kirincich, an oceanographer at WHOI. “We have a very shallow, wide shelf.”