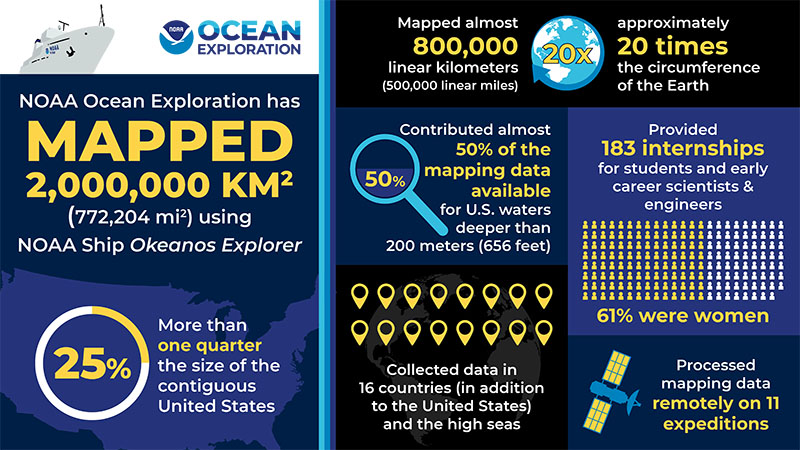 The 2 million square kilometers milestone was reached while mapping the Blake Plateau off the coast of the southeastern United States Nov. 1.

The NOAA Ship Okeanos Explorer has been responsible for the mapping since being commissioned in 2008. Earlier this year the ship had its mapping technology replaced with even better equipment in order to see more of the ocean floor.

Only waters part of the U.S. Exclusive Economic Zone were mapped, but it’s part of a long-term goal to map that entire zone by 2040. The goal is broken down into parts — map waters deeper than 40 meters by 2030 and near shore waters by 2040.

There’s still a long way to go as roughly 50% of the United States seafloor has yet to be mapped to modern standards. NOAA admits that the pace of mapping will need to improve and should do so as technology continues to improve.

There’s so much to thank the ocean for. From the air that we breathe to the food on our plates to the climate that makes our planet habitable

Nevertheless, so much of our ocean, the deep ocean in particular, remains unexplored.

Exploration leads to discovery, and the first step in exploration is mapping.

Seafloor mapping provides a sense of the geological features and animals of our deep ocean and sets the stage for discoveries to come.

But, it’s not just about the thrill of discovery.

Deep-ocean seafloor mapping has many benefits.

Broadly, it provides insight into geological, physical, and even biological and climatological processes, helping us better understand, manage, and protect critical ocean ecosystems, species, and services for the benefit of all. In addition, it supports navigation, national security, hazard detection (e.g., earthquakes, submarine landslides, and tsunamis), telecommunications, offshore energy, and more.

Now, all of this work is being done in support of the National Strategy for Mapping, Exploring, and Characterizing the United States Exclusive Economic Zone (national strategy), which calls for completing mapping of the U.S. Exclusive Economic Zone by 2040 (waters deeper than 40 meters (131 feet) by 2030 and the near shore by 2040).

As such, mapping is a critical part of every NOAA Ocean Exploration expedition on Okeanos Explorer. In addition, decisions about where we go and where we dive all start with a map.

We pursue every opportunity to collect and archive data from largely unmapped areas of the seafloor using the ship’s suite of modern sonars.

Over the years, mapping data collected aboard the ship in the Atlantic, Pacific, and Indian oceans as well as the Gulf of Mexico and Caribbean Sea have revealed numerous new features and spurred major discoveries.

NOAA Ocean Exploration has been mapping the seafloor of the Blake Plateau off the Southeast United States aboard NOAA Ship Okeanos Explorer (left) since 2011.

As a result of this mapping, NOAA Ocean Exploration and partner scientists discovered mounds of extensive, dense populations of the deep-sea, reef-building coral Lophelia pertusa (middle and right) — some in areas previously believed to be flat and featureless.

These mounds have been growing for thousands, perhaps millions, of years and provide shelter and habitat to a variety of marine life.

Now, at 28,047 square kilometers (10,829 square miles), this area is considered to be the largest known deep-sea coral province in U.S. waters, possibly the world.

Additional mapping data collected with the support of NOAA Ocean Exploration (not shown here) have contributed to a near complete map of the deep waters of the Blake Plateau, an area of interest for the National Strategy for Mapping, Exploring, and Characterizing the United States Exclusive Economic Zone.

NOAA Ocean Exploration also uses the multibeam sonar system on NOAA Ship Okeanos Explorer to search for shipwrecks and other submerged cultural resources that help us better understand the past. An anomaly in seafloor mapping data (inset) turned out to be a shipwreck, likely the World War II-era oil tanker SS Bloody Marsh.

The free and publicly accessible data collected aboard Okeanos Explorer have been used by countless scientists, ocean resource managers (e.g., managers of fisheries and marine protected areas), and students.

These data also contribute to Seabed 2030 , a collaborative, international effort to produce the definitive map of the world ocean floor by 2030.

Mapping technologies have come a long way in recent decades, and NOAA Ocean Exploration is consistently at the forefront of the deep-ocean mapping community in testing and implementing new and emerging technologies.

In 2008, NOAA Ocean Exploration and NOAA’s Office of Marine and Aviation Operations outfitted Okeanos Explorer with a state-of-the-art deepwater multibeam sonar system — the very first of its kind in the world — capable of collecting high-resolution mapping data across large areas.

And, in 2021, we replaced this system, again with the first of its kind, to enable even greater mapping data quality and coverage.

In addition, NOAA Ocean Exploration recently piloted the remote processing of mapping data in the cloud, allowing mappers and interns to participate from shore.

To meet the ambitious goals set by the national strategy and Seabed 2030, the mapping community is going to need to increase the pace, efficiency, and affordability of seafloor mapping.

Organizations will need to work together, leverage their resources and expertise, and increase the use of new tools and technologies like autonomous vehicles, innovative telepresence technologies, and the cloud.

Yes, 2 million square kilometers is a lot, and it’s an accomplishment to be proud of, but approximately 50% of the seafloor beneath U.S. waters remains to be mapped to modern standards.

NOAA Ocean Exploration is up to the challenge, and we will continue to evolve our operations, on Okeanos Explorer and through other mechanisms, to help meet it.

With so much to map, it’s a good time to be an ocean explorer.TThis milestone was met on November 1, 2021, on the Blake Plateau off the coast of the Southeast United States during the Windows to the Deep 2021 expedition.

‍This milestone was met on November 1, 2021, on the Blake Plateau off the coast of the Southeast United States during the Windows to the Deep 2021 expedition.