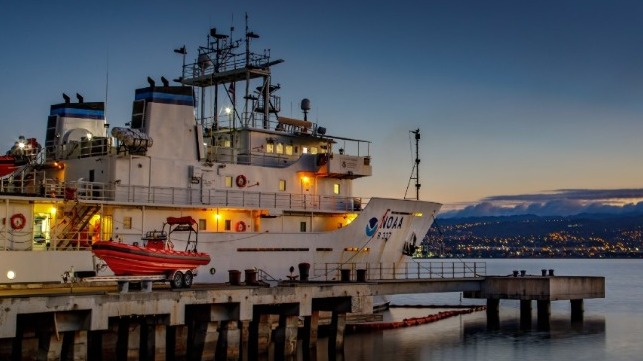 NOAA has awarded a contract worth $180 million to the Louisian shipyard Thoma-Sea Marine Constructors for a pair of new research vessels. Naval Sea Systems Command (NAVSEA) is working in partnership with NOAA on the newbuilds, reflecting its experience acquiring civilian research ships in the T-AGOR program.

“We can all be proud that these two new NOAA ships will be built in the United States by highly skilled workers, and to the highest standards,” said U.S. Secretary of Commerce Wilbur Ross. “The nation will benefit greatly from the information these state-of-the-art vessels will collect for decades to come.”

The new single-hulled vessels will be named after another pair of sister ships in the NOAA fleet. The Oceanographer, which will be homeported in Honolulu, takes her name from a NOAA vessel in service from 1966-1996. Her sister ship Discoverer was in service from 1967-1996. They were the largest vessels in NOAA's fleet, measuring in at more than 300 feet in length.

The first Oceanographer was NOAA's flagship for many years, and she had a globe-trotting service itinerary. In 1980, she became the first American government vessel to be allowed into the People's Republic of China since the Communist revolution in 1948.

The new Oceanographer and Discoverer will be built to commercial standards with EPA Tier IV engines, emissions controls, new digital tools for monitoring shipboard systems, and underwater scientific research and survey equipment. They will be equipped for standard oceanographic research work - launching work boats, performing maintenance on buoys and moorings, deploying instruments to collect weather and water column data, and conducting seafloor mapping surveys. Each vessel will operate with a crew of 20 and will be able to accommodate up to 28 scientists.

“This contract award represents a major step forward in the process to recapitalize NOAA’s ship fleet,” said NOAA Rear Adm. Michael J. Silah, director of the NOAA Commissioned Officer Corps and NOAA Office of Marine and Aviation Operations (OMAO). “We thank the Navy, our valued partner, for its assistance with this acquisition.”