Northeast
Kela, a beluga whale at Mystic Aquarium, wears a crittercam Feb. 8, 2011, while working with a trainer. National Geographic and Mystic Aquarium were working together to test the crittercam on beluga whales in captivity to see if it was possible to use the cameras in the wild. The aquarium announced Friday, Aug. 28, 2020, that the National Oceanic and Atmospheric Administration has approved its permit application to obtain five belugas from a facility in Canada. The aquarium says the new whales will help it broaden its research efforts. Dana Jensen / The Day 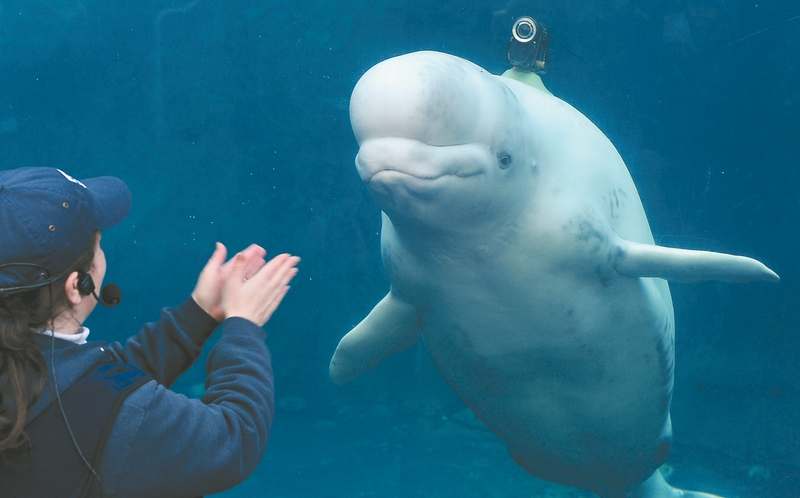 The National Oceanic and Atmospheric Administration has approved Mystic Aquarium’s request for a permit to import five beluga whales from a facility in Canada.

The whales will be transported from MarineLand in Niagara Falls, Ontario, for conservation research that Mystic Aquarium hopes will help shape and inform the management and recovery of wild belugas, including endangered and depleted populations. All five were born in captivity, meaning they have a hyper-dependency on humans and without intervention, would not survive, aquarium President and CEO Dr. Stephen M. Coan previously has said.

"We are incredibly grateful to NOAA, National Marine Fisheries and the Marine Mammal Commission for their diligence and commitment throughout the process," he said in a news release Friday announcing the decision.

The new whales will bolster the three currently in the Alaskan Coast exhibit at the aquarium, which typically sees 800,000 visitors a year.

The NOAA application process included a public comment period, a Nov. 18 public hearing — for which the agency received more than 6,500 comments for and against the application, The Associated Press reported — and meetings with stakeholders.

It has not been without controversy.

Critics have raised ethical questions, arguing that the aquarium uses the sea mammals for entertaining visitors and that the artificial habitat is much smaller than what wild whales are accustomed to. Animal advocates also said moving the whales would put too much stress on them.

“From a stress standpoint, from a welfare standpoint for the whales, I think it just makes more sense to do it there,” said Naomi Rose, a marine mammal scientist with the Animal Welfare Institute, had told The Associated Press. “The research can be done at MarineLand.” The institute also has accused the aquarium of improperly lobbying federal officials before filing its permit application.