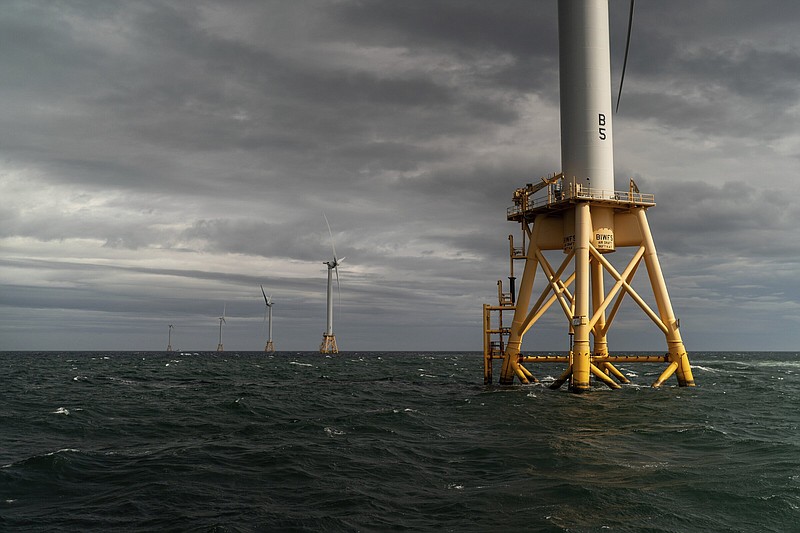 The live, online auction for five leases -- three off California's central coast and two off its northern coast -- has attracted strong interest, and 43 companies from around the world are approved to bid. The wind turbines will float roughly 25 miles offshore.

Growth of offshore wind comes as climate change intensifies and need for clean energy grows. Wind energy also is getting cheaper. The cost of developing offshore wind has dropped 60% since 2010, according to a July report by the International Renewable Energy Agency. It declined 13% in 2021 alone.

Offshore wind is well established in the United Kingdom and some other countries but is just beginning to ramp up off America's coasts, and this is the nation's first foray into floating wind turbines. Auctions so far have been for those anchored to the seafloor.

Europe has some floating offshore wind farms -- a project in the North Sea has been operating since 2017 -- but the potential for the technology is huge in areas of strong wind off America's coasts, said Josh Kaplowitz, vice president of offshore wind at the American Clean Power Association.

"We know that this works. We know that this can provide a huge slice of our our electricity needs, and if we're going to solve the climate crisis, we need to put as many clean electrons online as we can, particularly given increases in load demand with electric vehicles," Kaplowitz said. "We can reach our greenhouse gas goals only with offshore wind as part of the puzzle."

Similar auctions are in the works off Oregon's coast next year and in the Gulf of Maine in 2024.

Minimum bids for the leases range from $6 million to $8 million, but sales could go higher. An auction earlier this year for traditional offshore wind leases off the coasts of New York and New Jersey netted more than $4 billion, the record so far for the U.S.

The nation's first offshore wind farm opened off the coast of Rhode Island in late 2016, allowing residents of small Block Island to shut off five diesel generators. Wind advocates took notice, but with five turbines, it's not commercial scale.

The sale is designed to promote a domestic supply chain and create union jobs. Bidders can convert part of their bids into credits that benefit those affected by the wind development -- local communities, tribes and commercial fishermen.