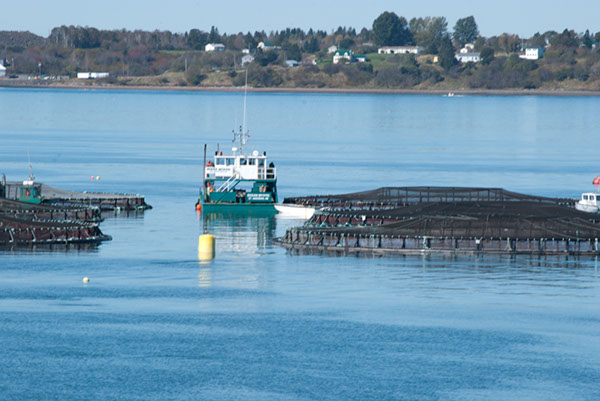 USA - Innovative Fish Farms Aim to Feed the Planet, Save Jobs and Clean Up an Industry's Dirty Reputation

Carter Newell owns and operates one of the most productive mussel farms in the state of Maine. One frigid spring morning I joined him and his two-person crew on a short boat ride to the barge he calls Mumbles, a 60-by-24-foot vessel anchored that day in a quiet cove in the brackish Damariscotta River. Named for the Welsh seaside town where Newell once did research, Mumbles was tethered to a steel-framed raft hung with hundreds of 45-foot ropes, each thick with thousands of mussels in various stages of development.

I shivered in the piercing wind as a crew member stepped from Mumblesonto the shifting raft to identify mussel ropes ready for harvest. Newell remained on the barge to helm a 16-foot crane that hauled up the designated ropes, each heavy with a Christmas tree–shaped aggregation of roughly 3,000 mussels. An outsized brush then swept the bivalves off the ropes and into an enormous stainless steel bucket. Another machine funneled them into a heavy polyethylene bag the size of a baby elephant, from which they were poured onto a conveyor-belt apparatus to be scrubbed, sorted and bagged. Newell designed this ungainly Willy Wonka–esque apparatus over decades in a costly process of trial and error that faced—and ultimately overcame—several challenges, including protecting the mussels from turbulent seas and voracious eider ducks.

As he oversaw the morning harvest, Newell, who has a Ph.D. in marine biology, talked some science—the dynamics of phytoplankton, why nitrate chemical concentrations increase in the winter, how chlorophyll levels for the entire coast of Maine can be mapped with just three satellite images. Mostly, though, he talked about mussels: their life cycle, their geographic distribution, how to prepare them (don’t spare the garlic) and—critically—how best to farm them without going broke. “Fish farming is no way to make a quick buck,” he told me.

The truth is that soon fish farming may be the only way for Maine’s struggling seafood workers to make any bucks at all. Thanks to overfishing, parasites and rising ocean temperatures, among other threats, nearly all of Maine’s commercial fisheries are in free fall. Maine cod is crashing, as are local shrimp. The wild mussel catch declined from 25 million pounds to a mere nine million over the past two decades. And lobsters, by far the state’s most profitable catch, are scuttling north to cooler Canadian waters. None of this bodes well for the state’s once robust seafaring economy: the average age of a Maine commercial fisher hovers above 50, suggesting that many young people have lost faith in the work.

As one wild fishery after another falters, the future of Maine—and, some say, the future of seafood—may lie in aquaculture, the cultivation of aquatic plants and animals. Historically, intensive fish farms have been linked to a lot of bad things: declines in biodiversity, habitat loss, the overuse of antibiotics, and animal welfare abuses, especially in Asia and Latin America. And in recent years fish die-offs and other problems have plagued North American sites. But Newell represents a new breed of scientist with innovative approaches to growing fish that are both economically and environmentally sustainable. His kludgy mussel-growing apparatus generates three times as much seafood as traditional mussel farms. And because free-floating mussel larvae seed the ropes naturally and eat whatever phytoplankton drifts their way, Newell’s farms require no human-generated feed or energy, a boon for the environment as well as for his bottom line.