Coastwide
Members of the Florida National Guard are seen at a coronavirus testing site on April 27 in North Miami. Restrictions are easing, but officials worry people might now hesitate to evacuate during a hurricane. JOE RAEDLE / GETTY IMAGES 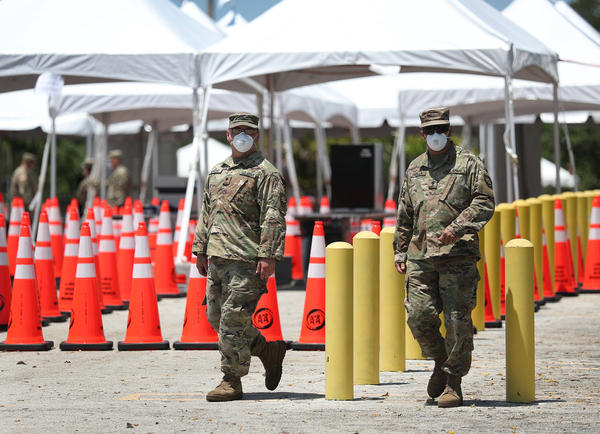 Robin Rokobauer doesn't like to chance it. When there's a hurricane, she almost always evacuates.

Rokobauer lives in Cocoa Beach, Fla., on a barrier island between the Atlantic Ocean and the 153-mile-long Indian River Lagoon. Her mother is 93.

But this year Rokobauer is thinking hard about her hurricane plan. She is 65, and like her mother, she's considered at higher risk of serious complications from the coronavirus, which has claimed more than 100,000 American lives.

"If I have to go any farther or if I have to go somewhere, then you're going to be exposed to more people in more environments, and you don't know where those people have been," she says.

The 2020 Atlantic hurricane season starts Monday, and federal scientists expect storms to be more frequent and powerful. Two named storms already formed in the Atlantic this spring before the official start of the season. As Florida and other coastal states plan for hurricanes, they are confronting troubling new public safety calculations because of the coronavirus.