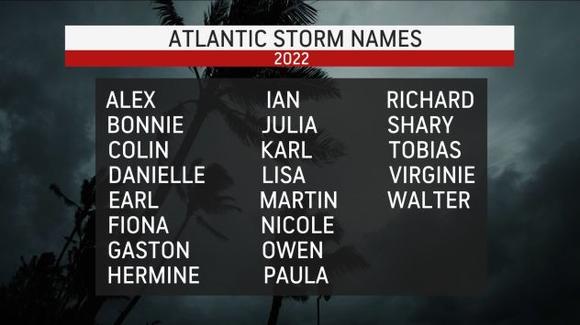 The Atlantic hurricane season is just a few weeks away with the official start arriving on June 1st. Forecasters are already predicting a active season.There is even a good chance for a preseason storm to develop for the third year in a row.

The past two hurricane seasons were active, the historic 2020 season reaching unprecedented levels and setting a new record for the number of named storms with 30. The 2021 tropical year was almost as prolific with 21 named storms, making it the third most active on record in terms of named systems. It also forced meteorologists to use the entirety of the designated storm name list for the second straight season.

The two previous seasons - 2020 and 2021 were also active. There was a with the devastating trio of major hurricanes -- Harvey, Irma and Maria -- striking over a one-month stretch in 2017, and hurricanes Florence and Michael blasting parts of the Southeast in 2018. In fact, the last season with a below-normal number of named storms was 2015

According to Accu-weather veteran meteorologist and hurricane expert Dan Kottlowski, this year is predicted to be an above-normal season in terms of tropical activity in the Atlantic, as well as a higher-than-normal chance that a major hurricane could make landfall in the mainland United States, Puerto Rico and the U.S Virgin Islands.

Specifically, the forecast is for 16-20 named storms and six to eight hurricanes. Of those hurricanes, about three to five are forecast to reach major hurricane status, which occurs when a storm reaches Category 3 strength with winds exceeding 111 mph or higher.

The forecast of 16-20 named storms is higher than the 30-year average of 14 per year, while the projection of six to eight hurricanes is about in line with the normal of seven. It’s also nearly identical to how 2021 played out. Last year, the 21 named storms included seven hurricanes and four major hurricanes. Eight of those storms made a direct impact on the U.S. About four to six direct impacts are predicted for 2022.

Long range predictions are not easy to make. Forecasters study a number of current weather trends, past hurricane seasons and climatological models to help piece together this meteorological puzzle.

The climatological phenomenon known as El Niño can help shape weather patterns worldwide, and in particular, play a major factor in how active a hurricane season can become.

La Niña is part of a three-pronged climatological pattern known as the El Niño Southern Oscillation [ENSO], which is a short-term climate fluctuation that is determined by the warming or cooling of the waters in the equatorial Pacific Ocean.

When a La Niña phase is present, as was the case in the past two extremely active years, the amount of vertical wind shear in the atmosphere can be limited as westerly winds typically stay farther to the north and away from the tropical Atlantic. Simply put, wind shear is the change in direction and speed of winds throughout the various levels of the atmosphere. Understanding how wind shear influences weather patterns is somewhat complex as there are multiple types of wind shear and because it can be a factor over the ocean as well as over land.