Gulf of Mexico
Members of the Pace Fire Rescue department wade through a flooded road after Hurricane Sally passed through the area on September 16, 2020 in Pensacola, Florida. Credit: Joe Raedle Getty Images 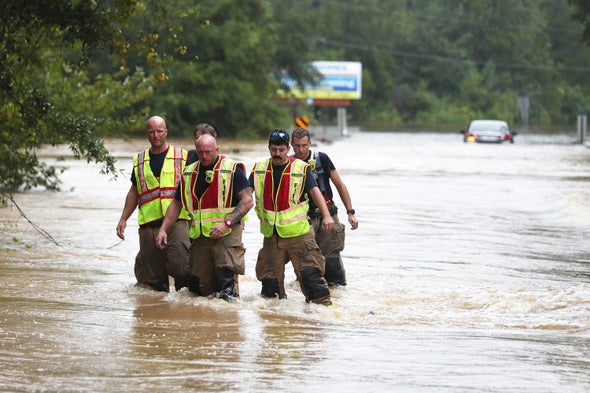 Tens of thousands of homeowners flooded by Hurricane Sally face potentially large financial losses because the federal government lists them improperly as living outside a flood zone and does not require them to have flood insurance.

The major flooding caused by Sally this week exposes flaws in the Federal Emergency Management Agency’s maps of the nation’s floodplains—flaws that lead homeowners to believe they do not face a significant flood risk and do not need flood insurance.

Sally made landfall along the Gulf Coast as a Category 2 hurricane Tuesday and was downgraded yesterday to a tropical depression. Flash flood watches were in effect from northern Georgia through the Carolinas into southeast Virginia. Roughly 500,000 customers remained without power in the Southeast.

The storm caused major flooding in southern Alabama and the Florida Panhandle, largely because of rainfall as opposed to wind-induced storm surge. Near Pensacola, Fla., in the small town of Molino, more than 16 inches of rain fell in a 24-hour period, according to a U.S. Geological Survey gauge.

FEMA flood maps don’t account for all of the flooding caused by major rainstorms such as Hurricane Sally, which means that FEMA’s flood zones exclude properties vulnerable to rain-induced “pluvial” flooding, Porter said.

FEMA maps account for rainfall only to the extent that rain causes rivers and larger streams to overflow. The maps don’t include rainfall that causes flooding outside of streams, Porter said.

“They don’t take into account small creeks, tributaries and heavy pluvial events,” Porter said. “Unfortunately for homeowners in this area, that’s going to drive a lot of the [recent] flooding, because it’s heavily pluvial.”