Gulf of Mexico
Hurricane Laura's damage and flooding as it made landfall in Cameron will be studied for months by weather scientists looking for clues about better protections and forecasts. Bill Feig / AP 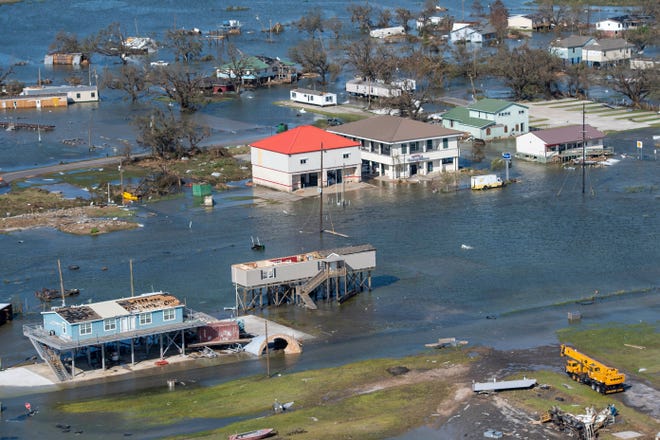 A massive storm surge and rough waves already were pushing inland from the Gulf of Mexico and Hurricane Laura’s earliest gusty winds and dark clouds threatened as a group of storm chasers hit Holly Beach.

With just 10 hours or so to go before Laura’s landfall, the chasers were in search of a palm tree, but not just any palm tree. It had to be a tree that would hold its own against a powerful storm surge and some of the worst winds ever to hit the Louisiana coast.

Mike Theiss, a National Geographic photographer and lifelong storm chaser, said he “freaked out” as he struggled to find that tree. Finally, they spotted a sturdy palm. With wind whipping around them, they strapped a package of metal poles to the tree with an anemometer and other instruments to measure and record wind speeds as Laura made landfall.

Theiss’ palm tree device is the newest tool among many that scientists use to study a storm like Laura. While many people define the impact of a hurricane by its human toll, its deaths, destruction and disruption of lives, weather scientists use instruments and data points to analyze all aspects of a hurricane's force and scope.

Laura's trek through the Caribbean, Gulf of Mexico, Louisiana, Texas and Arkansas gave researchers months of work, to analyze information they hope will help them understand the threat of such storms.

Their work will include a review of information they’ve already collected, like a 132-mph wind gust in Lake Charles and a near 17-foot high water mark on the Mermentau River at Grand Chenier.

Laura’s 150-mph winds at landfall tied with the Last Island hurricane in 1856 for strongest winds ever to hit Louisiana, and the hurricane claimed at least 52 lives, including 25 in Louisiana, 4 in Texas and 23 in the Caribbean.

The Holly Beach experiment, the first in Theiss’ Windy Palms project, was his brainchild and dream. After chasing storms for decades, he realized that palm trees are often one of the few things that survive a hurricane’s most extreme winds.

As he stepped back to look at this first deployment in the project, the storm chasers around him gave a joyful whoop. They were anxious to hit the road before being blocked by the rising storm surge.

“It’s not really the palm tree I was looking for,” said Theiss, “but it’s a palm tree that will work.”