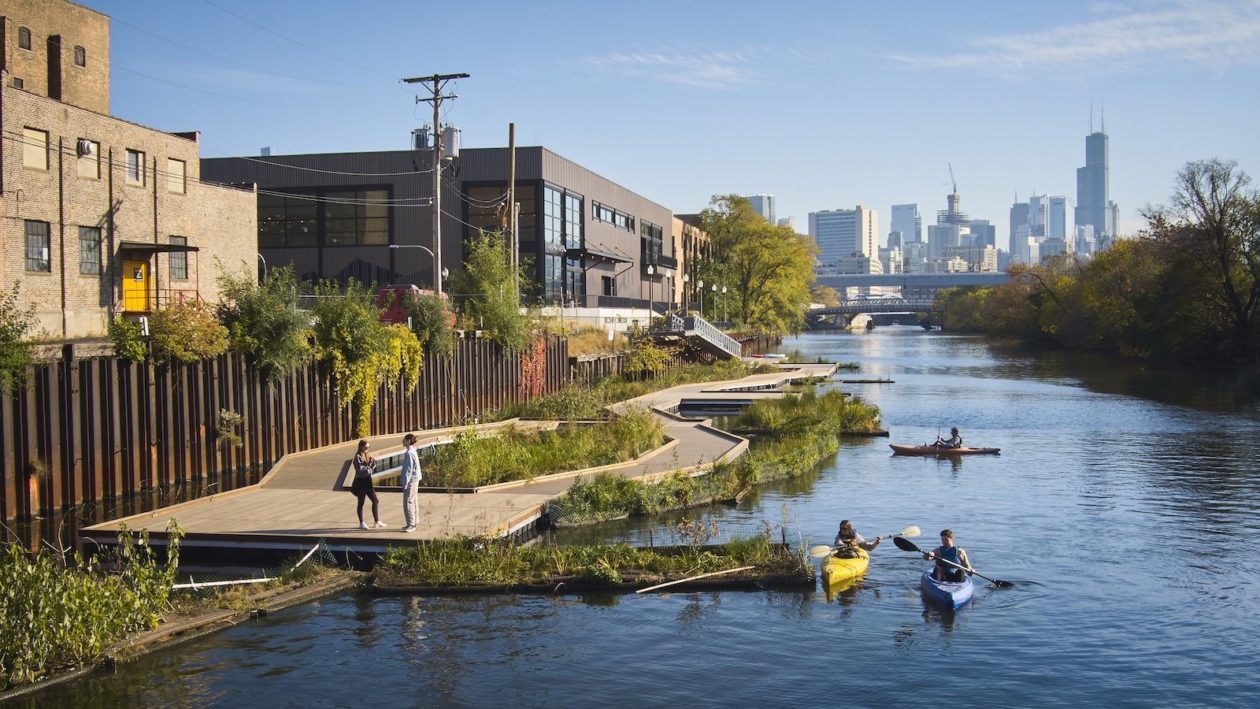 USA - How Floating Wetlands Are Helping to Clean Up Urban Waters

As cities around the world look to rid their waterways of remaining pollution, researchers are installing artificial islands brimming with grasses and sedges. The islands’ surfaces attract wildlife, while the underwater plant roots absorb contaminants and support aquatic life.

Five small islands roughly the size of backyard swimming pools float next to the concrete riverbank of Bubbly Creek, a stretch of the Chicago River named for the gas that once rose to the surface after stockyards dumped animal waste and byproducts into the waterway. Clumps of short, native grasses and plants, including sedges, swamp milkweed, and queen of the prairie, rise from a gravel-like material spread across each artificial island’s surface. A few rectangles cut from their middles hold bottomless baskets, structures that will, project designers hope, provide an attachment surface for freshwater mussels that once flourished in the river.

Three thousand square feet in total, these artificial wetlands are part of an effort to clean up a portion of a river that has long served the interests of industry. This floating wetland project is one of many proliferating around the world as cities increasingly look to green infrastructure to address toxic legacies. In the United States, researchers are conducting experiments in Boston and Baltimore as well as in Chicago, each team sharing best practices with the other to maximize the ecological benefits of their systems. The Canadian government and local municipalities are allotting more funding for innovative projects. Floating wetlands are also multiplying in the United Kingdom, and studies to quantify additional benefits continue in Australia and Brazil.

Floating wetlands filter contaminants and take up excess agricultural nutrients that can lead to algal blooms and dead zones.

Like natural wetlands, floating versions provide a range of ecosystem services. They filter sediment and contaminants from stormwater, and laboratory experiments show that some plants have the ability to lock up some chemicals and metals found in acid mine drainage. These systems take up excess agricultural nutrients that can lead to algal blooms and dead zones, and recent research suggests they could be used to reduce manmade contaminants that persist in the environment. Though it’s difficult to quantify the exact benefits these systems offer, and they have limitations as a tool in remediating polluted waterways, they could provide another option, researchers say.

Nick Wesley, executive director of Urban Rivers, a nonprofit working with the Shedd Aquarium on the Chicago project, believes floating systems are a natural fit for the urban environment. Many urbanized river systems, he says, have the same “steel sheet pile wall, some rough-wrap riprap on the edges. We’re trying to [restore] what the naturalized river would be.” In many cities, he continues, floating wetlands could provide a low-cost alternative to conventional infrastructure projects because they’re modular and easy to install and to monitor.

Wesley’s group began, in 2018, with a floating wetlands project on the Chicago River’s North Branch. Called the Wild Mile, the installation aims to improve water quality and has already begun attracting invertebrates, including mollusks and crustaceans. Last month, the group expanded to the shores of Bubbly Creek. Urban Rivers, Shedd employees, and a team of volunteers bolted together polyethylene and metal frames, draped them with matting, dropped them in the water, added plants, and anchored the islands to the river bottom so they stay in place as the roots grow into the water. The plants will grow for years to come, part of a “riverponic” system, as Wesley calls it, that requires no soil or other substrate for support.