Coastwide
Contractors for the U.S. Army Corps of Engineers pump sand from the ocean floor onto the beach in the Rockaway Peninsula in New York City, Oct. 18, 2022. They are crafting a 250-foot wide sandy beach along m...Show more Ted Shaffrey/AP, FILE 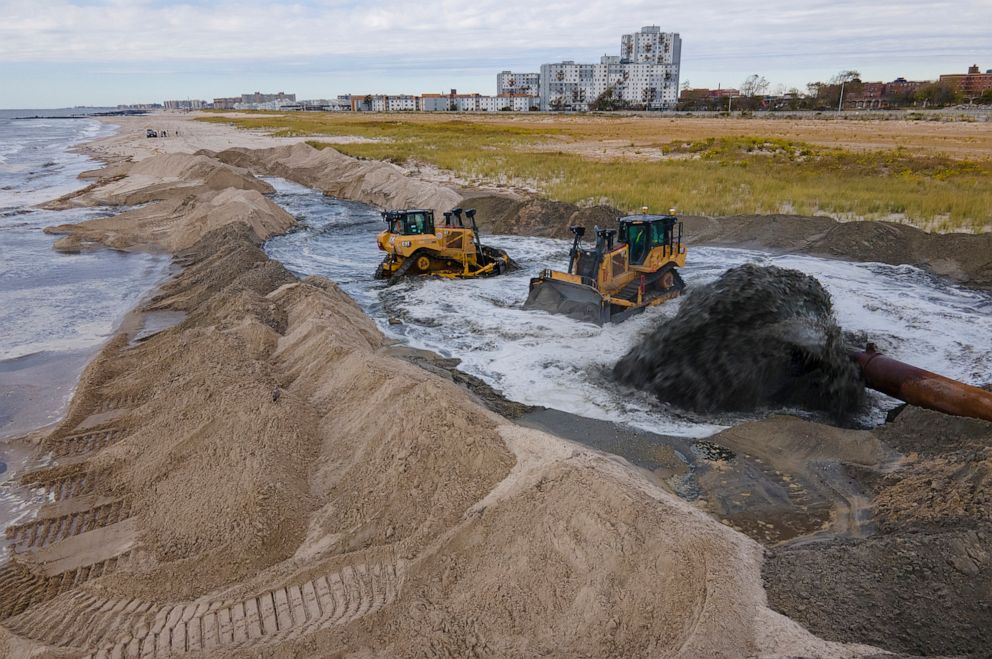 USA - How climate change, rising sea levels are transforming coastlines around the world

Long-term erosion and strong storms are chipping away at the shore.

Communities have gravitated toward the shore for thousands of years, building their lives in proximity to major waterways for easy access to trade, seafood and recreation.

But those who reside near coastlines will need to learn to adjust as climate change continues to create conditions that chip away at these malleable geological structures, according to experts.

One of the recurring topics of the 2022 United Nations Climate Change Conference taking place in Cairo, Egypt, is how climate change is currently affecting people around the world. As coastlines change and become battered by an increase in the number of severe weather events, homes -- and, in some cases, entire communities -- are being condemned as they become inundated with seawater the more the natural barriers are broken down.

The transformation of coastlines is constant. Coastal erosion is a natural part of the Earth's cycle as strong waves continually crash against the shore. But as global temperatures warm and sea levels rise, the damage to the coast's natural barriers is being exacerbated with each subsequent monster storm with tropical force winds or higher -- which typically causes the most damaging events of erosion, scientists say.

Erosion is a huge issue in the U.S., and it is made worse by sea level rise which increases the distance the wave energy moves inland, Dr. Ken Miller, Geologist at Rutgers, the State University of New Jersey told ABC News.

As melting glaciers and ice sheets cause sea levels to rise, the ocean waves around the coast become more intense, Raphael Crowley, associate professor at the University of North Florida's Engineering School of Sustainable Infrastructure and Environment, told ABC News.

In addition, gradual effects from day-to-day erosion reaching farther inland, such as land that was previously above sea level being underwater more, will weaken the structure of the coastlines even more -- allowing for strong storms to do more damage when they pass through, Ronadh Cox, a professor of geology and mineralogy at Williams College in Williamstown, Massachusetts, told ABC News. Each high tide that reaches previously dry land has a cumulative effect on shoreline retreat and the associated erosion.

"So, everything from nuisance flooding associated with tides rising higher, to storm surges penetrating farther inland, all contribute to these effects of the coast," Cox said.

The types of natural infrastructures that can be destroyed are sand dunes, cliffs and even living shorelines, such as plants, marshes and oyster reefs -- all of which can act as barriers to an influx of ocean water. A marsh measuring 15 feet deep can absorb about 50% of incoming wave energy, but these living barriers continue to dwindle, as well.

More than 80,000 acres of coastal wetlands are lost every year, according to the U.S. Environmental Protection Agency.

The deterioration of coastlines can also be impacted by the human tendency to develop right on top of them, according to experts.

As populations increase and more housing is built near the coast, oftentimes the coastal wetlands are drained to make room for development, Cox said.

When the barriers along the coastlines fail to keep ocean water out, it wreaks havoc on communities, Crowley said. Roads become impassable. Homes become at risk of being destroyed or even swept away in some cases of extreme storm surge -- like what happened in parts of southwest Florida due to Hurricane Ian.

"The combined effect of all of these things, of course, is increased erosion, land loss and infrastructure loss," Cox said.

Coastal erosion is already tallying up to about $500 million annually in property damage, according to the U.S. Climate Resiliency Toolkit, an online resource that compiles data from the U.S. federal government.

"The problem with coastal engineering is that coasts are constantly evolving," Crowley said.

If people want to live near the ocean, protection measures such as ensuring a high enough elevation and that there is a barrier between the structure and the water -- such as a sand dune -- should be implemented, Crowley said.

Severe storms can remove wide beaches in a single event. Following the passing of Hurricane Irma in 2017, Crowley witnessed what was previously a sand dune in north Florida's Vilano Beach transformed into "a 40-foot cliff with a house hanging off of it," he said. That structure was one of several dozen that Crowley knew would never be livable again, he said.