Gulf of Mexico
An aquaculture cage sits on the surface of the ocean for cleaning and inspection at Snapperfarm, Inc., a commercial open ocean finfish operation in Culebra, Puerto Rico. Because of the strong currents, extreme wave energy and exposure to weather events, the cages are operated fully submerged and are only brought to the surface for maintenance or to harvest fish. via NOAA Fisheries 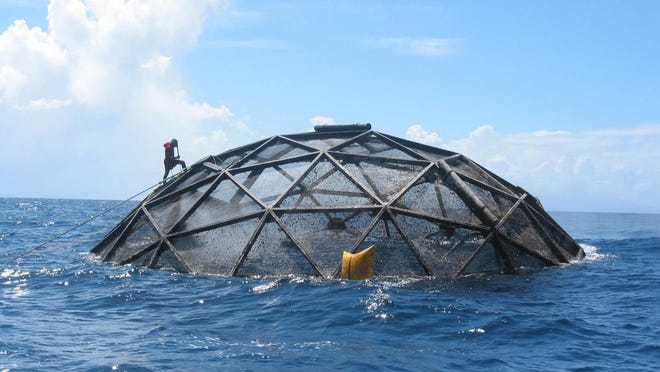 A new bill in Congress would open the Gulf of Mexico and other federal waters to offshore fish farming, a controversial idea backed by President Donald Trump’s administration but opposed by environmental groups and elements of the seafood industry that depend on wild fisheries.

Last month, the U.S. 5th Circuit Court of Appeals in New Orleans blocked federal rules that would have allowed offshore fish farming for the first time in the Gulf, considered potentially a prime area for raising high-value fish in large floating pens. The court said federal regulators lack the authority to “create an entire industry” not mentioned in the Magnuson-Stevens Act, the primary law governing fisheries since 1976.

“If anyone is to expand the 40-year-old Magnuson-Stevens Act to reach aquaculture for the first time, it must be Congress,” the decision said.

The AQUAA Act would do just that. It would establish national standards and a regulatory system for offshore aquaculture. It would also initiate a research and technology grant program to fund improvements in the industry.

Expanding aquaculture would be a boon to American businesses and help meet growing demand for seafood, Wicker said.

“Aquaculture is the fastest growing food production sector, but the U.S. lacks a comprehensive, nationwide system for permitting in federal waters,” he said in a statement. “This deficiency prevents the development of aquaculture farms, leading to more seafood imports.”

U.S. fishers and aquaculture operations have lagged in meeting demand for fish and other seafood. More than 80% of the seafood eaten by Americans is imported.

Opponents say offshore fish farms will create pollution in the form of fish waste, spread diseases to wild fish populations and increase competition with fishing companies that depend on wild catches.