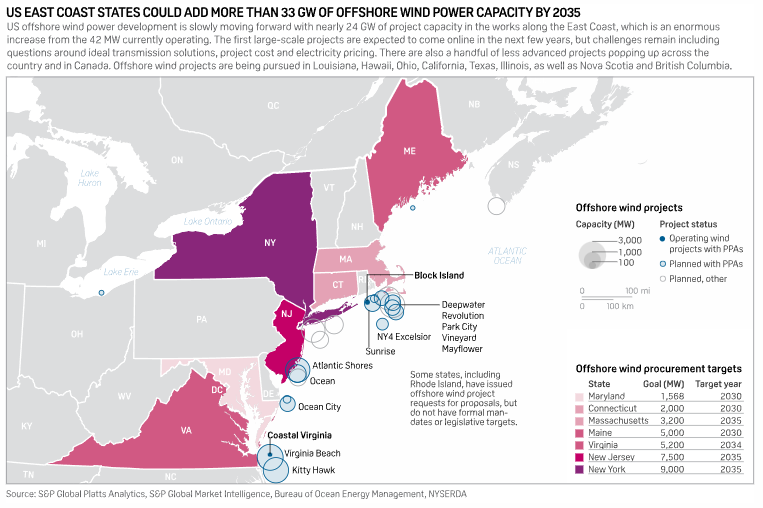 With more than 30 GW of offshore wind power capacity under development along the US East Coast, power market participants are paying close attention to when these projects will begin delivering power into the regional markets, with several milestones expected in 2022.

Some large state-level offshore wind solicitation winners were announced in December, and those projects will be watched in 2022.

Massachusetts on Dec. 17 awarded the Mayflower Wind offshore project 400 MW of capacity. In 2019, the state awarded 804 MW of capacity for the project, a joint venture between Royal Dutch Shell subsidiary Shell New Energies US and Ocean Winds of Spain.

Also, on Dec. 17, the Maryland Public Service Commission awarded offshore wind renewable energy credits, or ORECs, to two developers that have proposed more than 1,600 MW of electricity to be built off Maryland.

The decision in the states' second round of offshore wind solicitations supports US Wind and Skipjack Offshore Energy in building separate projects, the Public Service Commission said. Denmark's Ørsted is developing Skipjack, which was awarded 846 MW, and the US Wind project was awarded 808.5 MW.

Federal permitting reviews will be important in the coming years as the Biden administration has set a goal of installing 30 GW of offshore wind power capacity by 2030.

The Bureau of Ocean Energy Management, which handles federal offshore wind leasing and permitting, currently has nine construction and operations plans under review.