Coastwide
This table shows the estuaries studied for this report update. NI stands for natural infrastructure and BC is blue carbon. Image: The Economic Value of America’s Estuaries 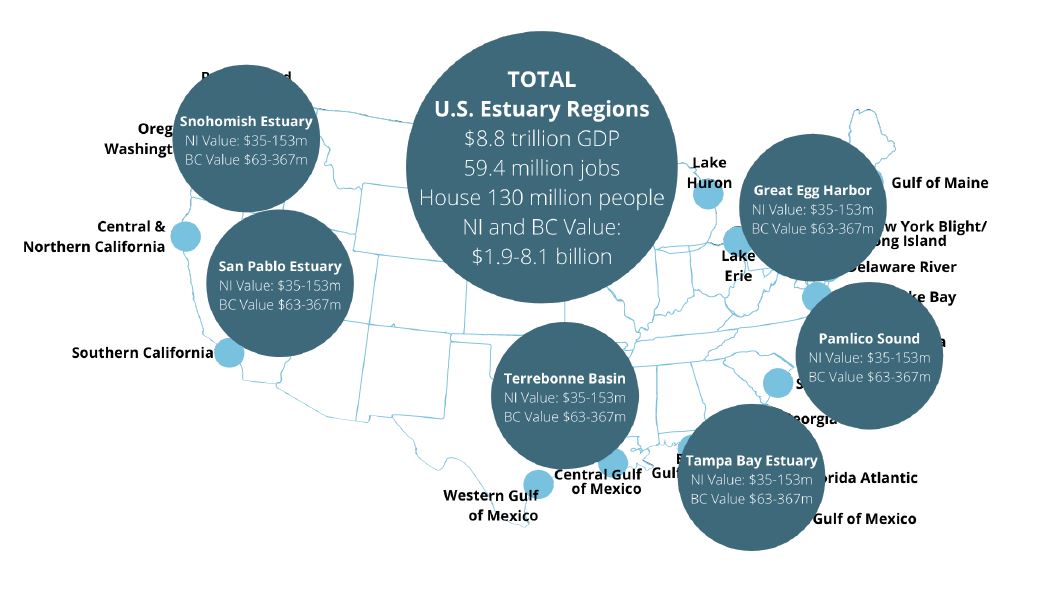 Though “geographically small,” estuaries are “economically huge,” according to a recently released update to a decade-old report on the economic value of these coastal regions where rivers mix with salt water.

Restore America’s Estuaries and The Ocean Foundation released in 2009 the report, “The Economic and Market Value of America’s Coasts and Estuaries: What’s at Stake?” Backed by the National Oceanic and Atmospheric Administration, this first report examined economic impacts of estuaries during that time to gross state and domestic product in 21 regions of the continental United States. It also reviewed the benefits of five major sectors of the economy: fisheries, energy infrastructure, marine transportation, real estate and recreation.

The 2021 update presented Nov. 3, prepared by TBD Economics and the Center for the Blue Economy, expands on the previous report and looks at natural infrastructure such as wetlands and oyster reefs, and coastal blue carbon, or the carbon captured by marine organisms and stored in coastal ecosystems, in the local economies of six case study sites: Pamlico Sound in North Carolina, Great Egg Harbor in New Jersey, Florida’s Tampa Bay, Terrebonne-Haute Basin in Louisiana, San Pablo Bay in California, and Snohomish Estuary in Washington.

“Estuaries are small places with huge economic impact. They’re 4% of the continental landmass in the U.S., eight of our 10 largest cities are along estuaries, 40% of our U.S. population and 47% of our gross domestic product are all generated from estuary counties. So what happens in estuaries affects all of us,” Restore America’s Estuaries President and CEO Daniel Hayden explained during the Nov. 3 press conference to present the report update.

Hayden said that since the first report, 15% more Americans live in coastal communities, especially within the Gulf Coast region. This means there’s more people and more property at risk than ever before. Also, there are two times the number of billion-dollar-plus storms as there were just a decade ago, resulting in 69% more deaths.

“These are trends that we’re seeing across the entire country,” Hayden said, citing a study from The Pew Research Center that found 63% of Americans say they’re seeing the effects of climate change today. “So this is no longer a future problem. It’s today’s reality.”