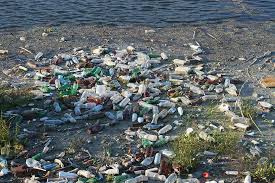 WASHINGTON - The growing amount of plastic waste clogging the world's oceans is drawing the attention of the Trump administration, with EPA Administrator Andrew Wheeler calling the problem a "top priority" Monday.

Wheeler outlined the administration's strategy for combating the problem, focusing on expanding and improving recycling capacity as well as maritime cleanup efforts.

"Internationally, up to 28 billion pounds of waste makes it into our oceans every year, harming marine life and coastal economies,” he said, during an event attended by numerous federal officials in Florida. "Working together with our global partners, we aim to solve the current growing marine litter problem in our shared oceans.”

The issue has been growing attention in recent years, as the waste management authorities worldwide struggle to handle the huge volumes of plastic from consumer packaging, which has proven difficult to recycle and in developing countries commonly is left on the side of the road to wash into rivers and oceans.

In the United States, less than 10 percent of plastic waste gets recycled, according to the EPA.