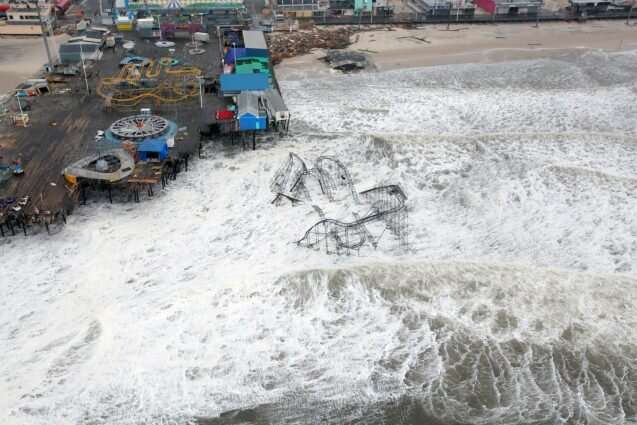 In the aftermath of Hurricane Katrina, my fourth-grade class raised money for the Red Cross by selling rubber wristbands. We lined up in the cafeteria to buy them, coming together as a school to support the victims of a "once in a lifetime" event.

Then in 2012, Hurricane Sandy hit New York City. I examined pictures of flooded apartments and damaged stores. The familiarity of it—an atypical storm scourging an entire coastline—felt ominous. Rather than a discrete, uncharacteristic experience, Hurricane Sandy hung in the air like a harbinger. For most of my life, New York City was firmly and reliably out of the direct path of most hurricanes.

A few weeks ago, Hurricane Ida hit New Orleans before spiraling up the east coast to New York City and beyond. Most major news publications did not call it a "once in a lifetime" event—sixteen years after Katrina, transformative hurricanes are too common to be crowned with such a hyperbolic epithet. These are seasonal nightmares, at best, and weekly nightmares, at worst. Gone are the days when a category five hurricane was exceptional and a hurricane in New York City was a crisis of the imagination.

Despite increasing occurrence and severity, most places in the United States are woefully underprepared for natural disaster. Climate change is here, but our attention and resources are repeatedly allocated to only one chapter of a climate event: crisis response. We mobilize quickly in the aftermath, but we often fail to acknowledge that natural disasters are years in the making. The structural impact of any one storm can differ vastly based on infrastructure planning and investment in natural disaster prevention.

There was a brief window to prepare for Hurricane Ida. First responders were informed, local governments could proactively guide citizens, and susceptible residents could ready their families and their property. But a few days' warning can only go so far; when Ida struck, entire communities remained vulnerable. Across states, first responders rushed to relieve the immediate crises where possible, but the underlying infrastructure had already failed them.

Now, communities impacted by Ida face the second leg of the disaster—the long-term recovery. The lasting consequences of the storm have started to emerge: power outage, flooding, garbage collection, home reconstruction, hunger, and more. There is undeniable urgency to solve these issues. At the same time, with infrastructure destroyed, there is a chance to reimagine what reconstruction looks like.

Too often, crisis relief and long-term planning are unnecessarily regarded as trade-offs. One Louisiana-based company, PosiGen, demonstrates an alternative to that thinking.