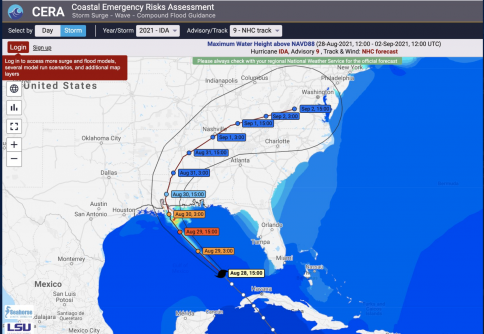 More than half of the U.S. population lives in coastal watershed counties or parishes. Coastal communities along the Gulf of Mexico are among the most heavily populated – also a region where high concentrations of energy resources have made it a national hub for many large-scale carbon-to-capture storage facilities.

The proximity to the ocean of both local communities and energy infrastructures make both extremely vulnerable to the devastation that can be caused by flooding and wind damage from severe weather events in the Gulf, which are increasing in both frequency and intensity with every hurricane season.

Clint Dawson, a professor in the Department of Aerospace Engineering and Engineering Mechanics (ASE/EM) and director of the Computational Hydraulics Group at the Oden Institute for Computational Engineering and Sciences at UT Austin, is working to make storm surge predictions for hurricanes more accurate than ever. Thanks to a new grant from the Department of Energy (DOE), Dawson will lead an interdisciplinary research project to develop a computational “digital twin” framework that bridges the gap between multi-physics simulations and knowledge discovery through artificial intelligence (AI) and machine learning (ML) technologies, called MuSiKAL.

Digital twin technology has already been developed for everything from modern aircraft design, to systems assisting in the management of cities or urban centers, and even the human body for medical research purposes. The tools and methodologies used often vary depending on the application. In the context of extreme weather modeling though, a digital twin could be described as a virtual representation of a weather system that spans its entire lifecycle, frequently through regular real-time data updates, provided by sensors spread across the system. Using simulations, machine learning and other decision-making technologies, digital twins can help predict future performance and behavior.