Coastwide
Trains carrying coal run through Gillette on May 18. The decline in Wyoming's coal industry has meant less money for schools.Lauren Miller, Star-Tribune 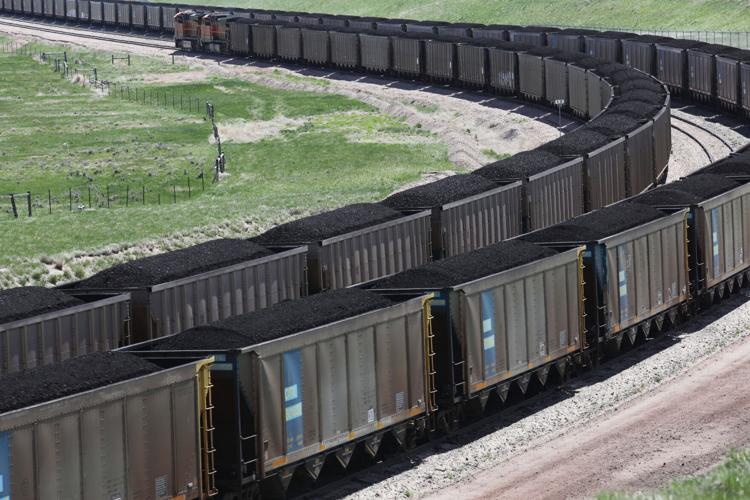 USA - Demand for Wyoming coal is collapsing. Seismic changes are ahead for the state

Wyoming used to power the nation. For 37 years and counting, U.S. power plants have burned more coal from Wyoming than from any other state.

The millions of tons loaded each year onto thousands of trains and distributed to hundreds of buyers have afforded Americans steady access to the many, multiplying conveniences of modern life.

Lower in toxic sulfur compounds than its East Coast counterpart and possible to mine at an unmatched scale, Powder River Basin coal rose between the close of the 20th century and the dawn of the 21st as a natural source of pride, and wealth, for Wyoming.

The big paychecks and good benefits dispensed by coal mines supported entire families. Power plants situated at the mouths of those mines kept utility bills low. The mines’ tax dollars built Wyoming’s schools and, along with oil and natural gas companies, pumped enough revenue into the state economy that individuals remained largely off the hook.

“We have so much money in the state coffers that came in from energy,” said U.S. Sen. John Barrasso, R-Wyo. “We’re committed to make sure those resources don’t get stranded and [are] able to be used for the benefit of all the people of the state. And coal’s a big part of that.”

Almost all of Wyoming’s coal — over 96% in 2021 — comes from Campbell County, where Peabody Energy’s North Antelope Rochelle Mine and Arch Resources’ Black Thunder Mine have competed with each other for the title of most productive coal mine in the country. Seven more Campbell County mines also rank in the top 15 nationwide.

(The company changed its name from Arch Coal to Arch Resources in 2020 to reflect a shift in focus away from its Wyoming and Colorado operations and toward its metallurgical mines in West Virginia, which produce a different type of coal used chiefly for steelmaking.)

A few summers at Black Thunder in the early 2000s, when the Wyoming coal industry was nearing its peak, paid Lundvall’s way through college. His father worked at the mine for more than 25 years.

“We have a lot of loyalty to Arch Coal, and Black Thunder, and the staff, and the higher management,” Lundvall, who now works for a heavy equipment construction company, said. “We couldn’t have asked for a better life.”

Every person in Wyoming has benefited, directly or indirectly, from coal money. But with most of the U.S. electricity sector now building toward a future after coal, Wyoming’s dominance — along with its income — is fading fast. State leaders have tried over and over again to do something more than patch the state economy. Over and over again, those efforts have fallen short.

Wyoming’s adversary isn’t a single political figure. It’s not even a single administration. In its quest to save coal, the least populated U.S. state has instead found itself increasingly at odds with the direction of the national economy. The average American wants coal use, or at least coal’s emissions, to come down.

A long way down

The market for Wyoming’s coal has been shrinking for more than a decade. Production in 2021 barely amounted to half its 2008 peak, and the experts keeping a close eye on state revenue predict that coal yield will halve again before 2030.

Electric utilities across the country have already set plans in motion to eliminate about one-third of the state’s surviving coal demand in those next seven years, a Star-Tribune analysis of publicly announced retirement dates found. Many U.S. coal plants are also likely to see their operations curtailed ahead of, or in place of, retirement.