Coastwide
Todd Bridges, a senior research scientist for the U.S. Army Corps of Engineers, walks along a new wetland area that had been flooded in 2019 a few miles south of Rock Port, Missouri, on Monday, July 26, 2021. The wetland is part of the Corps' Engineering with Nature initiative, a program that uses engineering to create and restore natural habitats in a way that's cost efficient and environmentally friendly. (AP Photo/Grant Schulte) 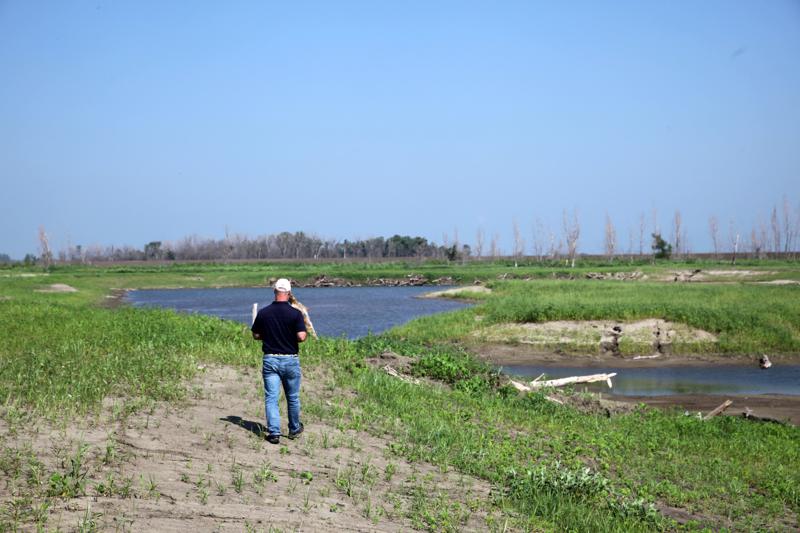 The U.S. Army Corps of Engineers is known for damming rivers and building levees to keep waterways at bay. But a new initiative seeks natural flood control solutions as climate change brings increasingly frequent and severe weather events that test the limits of concrete and steel.

It only makes sense to use Mother Nature’s flood defenses as one of the tools to combat destruction from intense rains in the middle of the country and storms and sea level rise on the coasts, says Todd Bridges, who heads the Corps Engineering with Nature initiative.

Pieces are in place to make the change. In the 2020 Water Resources Development Act, Congress directed the Corps to consider nature-based systems on equal footing with more traditional infrastructure. And the initiative was directly funded for the first time last year with $12.5 million.

But the Corps is often constrained by its own rules and the way costs and benefits of its projects are evaluated.

“The Corps has a lot of people who are used to doing things a certain way,” said Jimmy Hague, The Nature Conservancy’s senior water policy advisor. “We’re tracking some projects right now where nature-based solutions are almost an afterthought.”

In Missouri, the Corps recently completed a levee setback along the Missouri River after the existing levee was overtopped and breached by flooding in 2019. Rather than simply repairing the levee, the Corps built a new 5-mile (8-kilometer) stretch farther from the river, opening up about 1,000 acres (405 hectares) of floodplain to help reduce future flooding while providing habitat for rare and declining species.

Dave Crane, the Corps’ environmental lead on the project, said making it happen was not simple. The Corps is required to repair levees at the lowest cost, and only extreme damage to the original levee made building a new one possible under its rules.