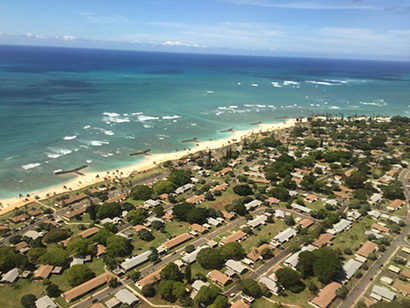 A new study led by researchers at the University of California, Santa Cruz, and the U.S. Geological Survey reveals how valuable coral reefs are in protecting people, structures, and economic activity in the United States from coastal flooding during storms.

Published April 15 in Nature Sustainability, the study found that coral reefs offer more than $1.8 billion in annual flood protection to coastal communities. Losing 1 meter of reef height would cause 100-year flooding zones to increase by 23%, impacting 53,800 more people (a 62% increase) and 90% more property and increasing damages by $5.3 billion.

“Valuing the flood risk-reduction service of existing ecosystems is one step toward managing them as natural infrastructure,” said lead author Borja Reguero, an associate researcher at UC Santa Cruz. “This study provides new local information on how reefs protect communities at the building-block level, while maintaining a national focus for policy purposes.”

The researchers combined computer models of storms and waves with engineering, ecological, mapping, social, and economic tools to create detailed and rigorous estimates of the value of coral reef defenses along U.S. coastlines. They analyzed flood risk and assessed reef benefits along the reef-lined coasts of Hawaii, Florida, Guam, American Samoa, Puerto Rico, the U.S. Virgin Islands, and the Commonwealth of the Northern Mariana Islands.