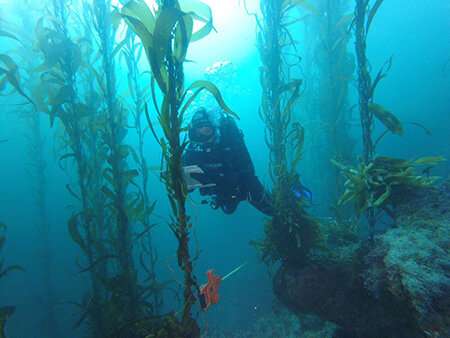 In a sweeping display of the power of community-based science to capture data spanning the entire West Coast of North America, a team of scientists and countless volunteers from 14 different organizations joined forces to document the northward migration of kelp forests due to warming waters.

"This is a rare instance when so many have collaborated from Alaska to Mexico to describe how kelp forest ecosystems are being influenced by climate change and how differences among regions of the coast can help us identify where communities and fisheries are most likely to be impacted," said Mark Carr, professor and chair of ecology and evolutionary biology at UC Santa Cruz.

Kelp forests are among the most productive and species-rich marine ecosystems in the world. Canopy-forming kelps declined in abundance across the entire study region, but declines were highest in the southernmost portion of the range and in the Northern California ecoregion. Temperate kelp forest ecosystems appear especially vulnerable to marine heatwaves such as the anomalous "warm blob" that appeared in 2014-16.

The results suggest that coastal communities that are dependent on kelp forests will be more impacted in the southern portion of the California Current region, highlighting the urgency of implementing adaptive strategies to sustain livelihoods and ensure food security. The study also highlights the importance of monitoring programs that span an entire ecosystem's range.

"Thanks to a standard monitoring program that spans oceans, years, and many collaborative efforts, we could look at an entire system and gain unique insights. If we had studied just individual areas, we never would've been able to draw the same conclusions about how kelp forests are changing," said senior author Brock Woodson of the University of Georgia.

The researchers hope that this project can serve as a model for how to harness the power of cooperation and volunteer-driven data.