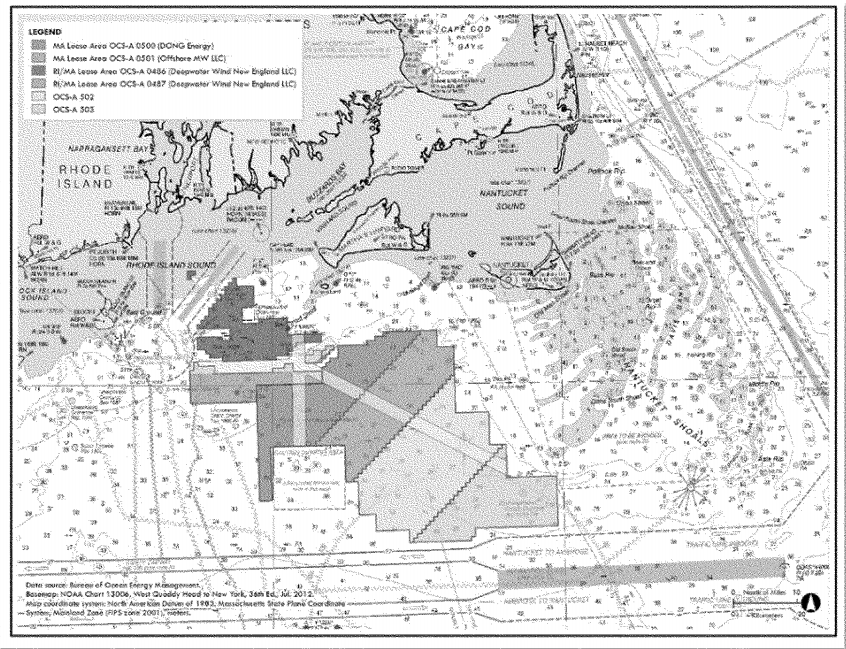 BOSTON - The U.S. Coast Guard has concluded that the best way to maintain maritime safety and ease of navigation in the offshore wind development areas south of Martha's Vineyard and Nantucket is to install turbines in a uniform layout to create predictable navigation corridors.

The results of the Coast Guard's Massachusetts and Rhode Island Port Access Route Study are largely in line with a proposal that the five developers that hold leases for offshore wind sites off New England made late last year to orient their turbines in fixed east-to-west rows and north-to-south columns spaced one nautical mile apart.

Having a consistent turbine layout across the seven adjacent lease areas, the companies said, would provide fishermen with the benefit of not having to change their practices as they pass from one lease area to another, and would promote safe maritime navigation. The Coast Guard agreed.

"The USCG has determined that if the MA/RI [Wind Energy Area] turbine layout is developed along a standard and uniform grid pattern, formal or informal vessel routing measures would not be required as such a grid pattern will result in the functional equivalent of numerous navigation corridors that can safely accommodate both transits through and fishing within the WEA," the Guard wrote in a summary of its findings published in the Federal Register.

When the wind energy companies put forward their proposed arrangement that would create "231 transit corridors in four cardinal directions," they asked the Coast Guard to adopt the proposed layout "with no additional designated transit corridors." Again, the Coast Guard agreed and sided with the developers over the objections of commercial fishing interests that pushed for six designated lanes, each four nautical miles (nm) in width, through which they can travel without encountering any of the hundreds of turbines that could some day populate the waters.