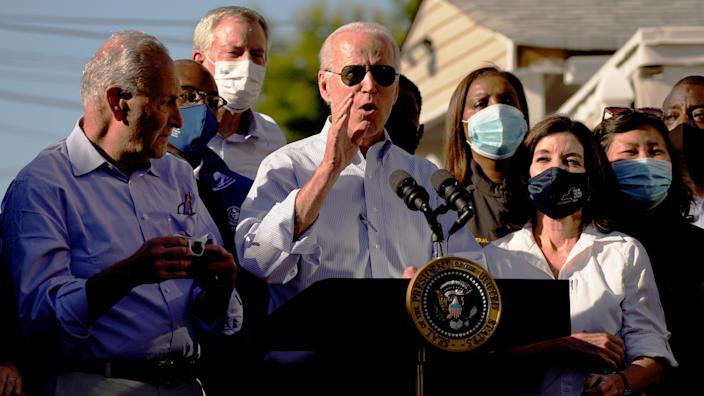 Last week, as Congress considered a massive infrastructure package, Hurricane Ida barreled through major cities from Louisiana to Massachusetts, offering up the latest examples of how extreme weather can wreak havoc on subway stations, roadways and power lines.

One-quarter of residents in New Orleans still remain without power. Up north, some residents of New York City and New Jersey continued to sort through wreckage on Tuesday when President Biden visited and met with officials. Biden, Gov. Phil Murphy of New Jersey and Senate Majority Leader Chuck Schumer, all Democrats, used the occasion to note the urgency of passing an infrastructure bill.

“In the span of just one week, New York City saw two once-in-a-century storms,” Schumer noted, referring also to Hurricane Henri, which drenched the Northeast on Aug. 22, setting a record for rainfall in New York that Ida then swiftly obliterated.

“This is not normal,” said Schumer. “That’s why we so urgently need, Mr. President, your big and bold Build Back Better plan.”

Biden hit the same notes even harder. “Climate change poses an existential threat to our lives, to our economy,” he said. “And the threat is here; it’s not going to get any better. The question: Can it get worse? We can stop it from getting worse. And when I talk about building back better — and Chuck is fighting for my program — our program — on the Hill — when I talk about building back better, I mean, you can’t build to what it was before this last storm. You’ve got to build better, so if the storm occurred again, there would be no damage.”

Environmental advocates and experts are unanimous in their support for the Build Back Better agenda, which is actually two bills: the bipartisan infrastructure bill that passed the U.S. Senate and the budget framework that passed both houses of Congress on party-line votes and which will have its details filled in during the reconciliation process.