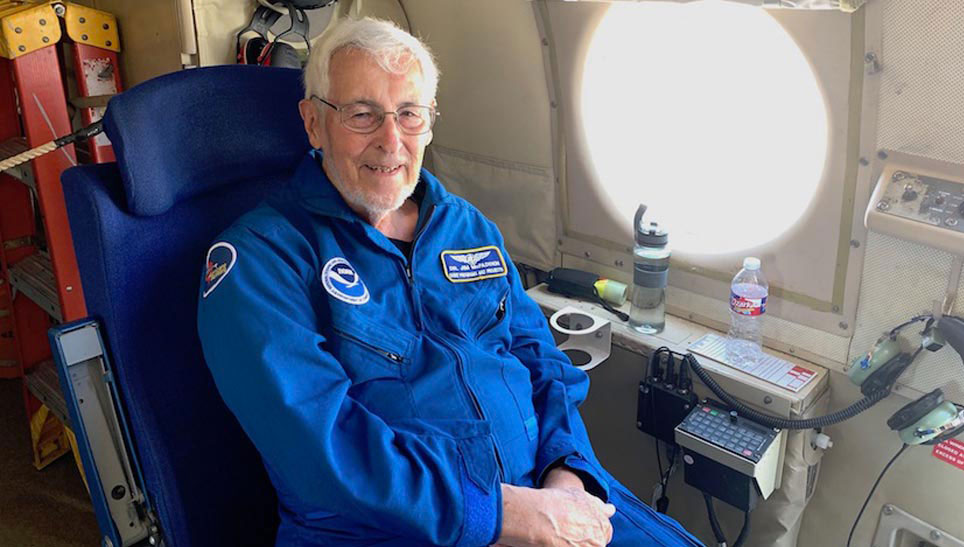 McFadden, who died recently at age 86, spent 53 years as a Hurricane Hunter, logging 590 penetrations into eyes of hurricanes.

The Hurricane Hunters have lost their longest-serving warrior of all-time: Dr. James McFadden, leader of NOAA’s hurricane science program at the Aircraft Operations Center. A 53-year veteran of flying into hurricanes, McFadden passed away peacefully on Monday, September 28, at age 86. He died with his family at his home in Coral Gables, Florida, after a brief illness.

At the time of his death, McFadden was serving as the chief of programs and projects at NOAA’s Aircraft Operations Center in Lakeland, Florida, where he was responsible for coordinating all research projects on NOAA’s aircraft, including their three hurricane research airplanes: two P-3 Orions and a high-altitude Gulfstream-IV jet. He had held that position for over 35 years, and had been active in hurricane research since 1965. His government career spanned 57 years, beginning in 1962, after he earned his Ph.D. in meteorology at the University of Wisconsin.

A NOAA Hurricane Hunter for a remarkable 53 years

McFadden did his first hurricane eye penetration on October 6, 1966, into category 3 Hurricane Inez off the coast of Mexico’s Yucatan Peninsula. In a 2018 interview with CNN, he said, “It wasn’t that impressive a storm. So it was kind of (like), ‘Well, that wasn’t too bad. I had heard all these stories about the Hurricane Hunters and what a fearsome job it was, and all that kinda stuff, and I was just sort of underwhelmed by my first hurricane penetration.”

McFadden kept flying into hurricanes for another 53 years, logging a total of 590 penetrations into hurricane eyes. His final storm flight took place on September 22, 2019, into Tropical Storm Jerry, northeast of the Leeward Islands. So his active career spanned 52 years, 352 days, earning him a spot in the Guinness Book of World Records for longest career as a Hurricane Hunter. He was named a 2016 finalist for the Samuel J. Heyman Service to America Medals, which are lauded as the “Oscars” of government service.

I had the honor of having Jim as my mentor during my four years as a flight meteorologist flying on NOAA’s P-3 Hurricane Hunter aircraft between 1986 and 1990, and will greatly miss his enthusiasm, knowledge, sarcastic wit, and dedication to hurricane science. Jim was never afraid to fight battles against bureaucracy, and he did just that throughout five decades of government service.