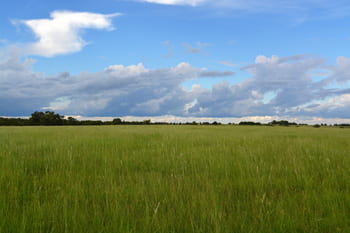 A working group led by Rice University’s Baker Institute for Public Policy has developed an innovative measurement-based standard – “BCarbon” – for removing carbon dioxide from the atmosphere and storing it in the soil as organic carbon.

The proposed system is designed to enhance economic resilience for both the agricultural and industrial communities, offering solutions that could result in a new multibillion-dollar market while restoring the robust ecosystem of the native prairie and grasslands, the group said. “Increasing biodiversity, restoring natural water cycles and improving drought resistance are all important co-benefits that enhance quality of life for rural communities and economic resilience of ranches and farms,” group leaders wrote in a paper released today.

This proposed standard is voluntary and designed specifically to work for landowners and businesses in the United States. The approach could unlock the potential for removal, storage and certification of upwards of 1 billion tons of carbon dioxide.

The group, established in fall 2019, is co-led by attorney Jim Blackburn, a professor in the practice of environmental law at Rice, Baker Institute Rice Faculty Scholar and co-director of the university’s Severe Storm Prediction, Education and Evacuation from Disasters Center (SSPEED), and Kenneth Medlock, the James A. Baker III and Susan G. Baker Fellow in Energy and Resource Economics and senior director of the Center for Energy Studies at the Baker Institute. Robin Rather, CEO of Austin-based Collective Strength, is the group’s facilitator.