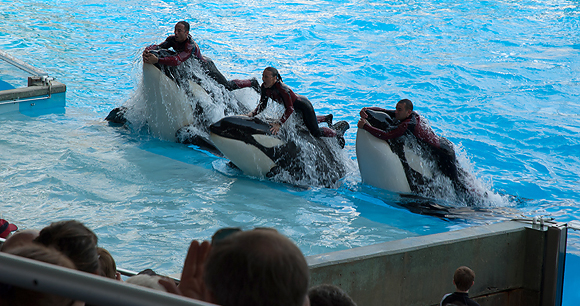 The Alliance of Marine Mammal Parks and Aquariums, which includes SeaWorld and other industry groups, have asked Congress for more than $800 million in emergency COVID-19 funding but advocates have raised objections.

Washington, DC (July 20, 2020)—In a letter delivered today to congressional leaders, the Animal Welfare Institute (AWI), the International Marine Mammal Project (IMMP) of Earth Island Institute, Oceanic Preservation Society, and 16 other animal protection and conservation groups are urging lawmakers to require that any aquarium or marine theme park benefiting from COVID-19 emergency funds take steps to phase out the captivity of whales and dolphins.

The letter comes in response to a June request for emergency federal funding from the Alliance of Marine Mammal Parks and Aquariums and other industry groups. The groups are asking Congress to allocate more than $800 million in National Fish and Wildlife Foundation funds to help aquariums and zoos offset financial losses due to COVID-19 closures. Many of these facilities have already received funding under the CARES Act passed in March, according to media reports.

The animal protection and conservation groups have requested that any future COVID-19 funding be contingent on the aquariums agreeing to halt all cetacean imports from outside the United States (unless the import is in the cetacean’s best interest), and to discontinue captive breeding programs involving cetaceans. Since aquarium associations are opposed to releasing captive-born cetaceans in the wild, breeding more animals “makes no sense during this time of revenue decline,” according to the letter. Congress should instead encourage aquariums and the National Marine Fisheries Service to begin to retire captive cetaceans to seaside sanctuaries as they become operational.

“While we feel it appropriate for Congress to provide support to such institutions to help maintain the health and welfare of their animals,” the letter said, “we also feel such funding should come with restrictions on certain activities that are outdated and no longer acceptable for zoos and aquariums, and directly exacerbate the financial stressors these facilities are presently facing.”

Extensive peer-reviewed studies in recent years, in addition to the 2013 documentary “Blackfish,” have demonstrated that cetaceans suffer significant physical and mental health problems in captivity. Whales and dolphins are complex social animals and are not suited for a life in captivity. When confined, they are prevented from carrying out natural behaviors, which include ranging widely, hunting live prey, and choosing their own social partners.

Many species die at an earlier age in captivity than they would in the wild, and suffer from numerous stress-related infections, ulcers, broken teeth, aggression from tank mates, and more.

In the wild, orcas have never killed or seriously injured a human being in all of recorded history. But captive orcas, frustrated and bored, have killed four people in aquariums, including three trainers, and have seriously injured several more.

”We do not oppose distributing relief funds during the pandemic to zoos and aquariums with captive cetaceans,” stated Dr. Naomi Rose, AWI’s marine mammal scientist. “The animals in these facilities must continue to be cared for, even while these attractions are closed to the public. But federal dollars should not go to facilities that insist on breeding more mouths to feed, especially when they can’t afford to feed the ones they have without taxpayer assistance.”

Moreover, despite their assurances, zoos, aquariums, and marine theme parks that display cetaceans largely fail to provide essential or even accurate conservation or education resources.

“Congress can help end the suffering of dolphins and whales in captivity by phasing out captivity,” said Mark J. Palmer, IMMP’s associate director. “There is no need for captive breeding of cetaceans, as it only produces more animals that are unlikely to survive in the wild. Imports from foreign countries deplete wild populations of cetaceans. It’s time to stop.”

The Animal Welfare Institute (www.awionline.org) is a nonprofit charitable organization founded in 1951 and dedicated to reducing animal suffering caused by people. AWI engages policymakers, scientists, industry, and the public to achieve better treatment of animals everywhere – in the laboratory, on the farm, in commerce, at home, and in the wild. Follow us on Facebook, Twitter and Instagram for updates and other important animal protection news.