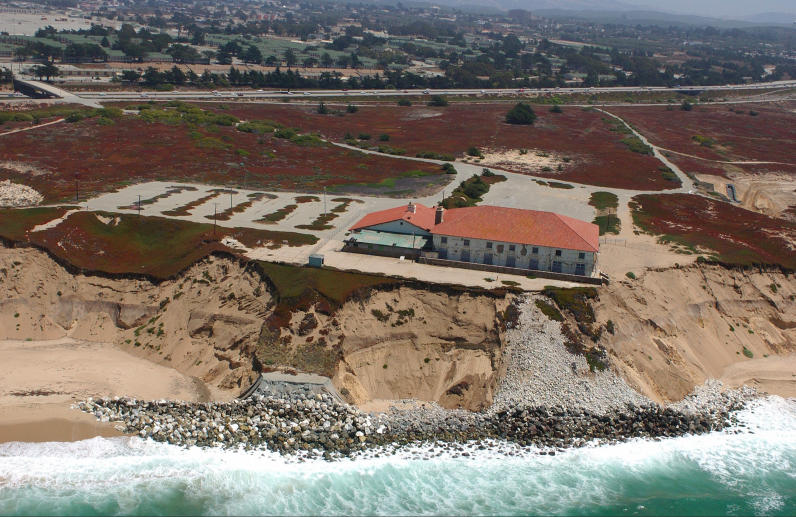 Global sea level is rising at an increasing rate and communities and cities around the planet are in the way. While we know the historic and recent rates of sea level rise, projections for the future are difficult due to political, economic, and social unknowns, as well as uncertainties in how the vast ice sheets and glaciers of Antarctica and Greenland will respond to continued warming of the atmosphere and the oceans. It is clear, however, that sea level will continue to rise for centuries due to the greenhouse gases already in the atmosphere as well as those we continue to produce. A rising ocean leads to a retreating coastline, whether gradual inundation of low-lying shoreline areas or increased erosion of cliffs, bluffs, and dunes. Coastal armoring and beach nourishment have been the historical approaches to address coastal or shoreline erosion, but these are laden with economic and environmental costs, often short-lived, and have significant impacts on beaches; their approval by permitting agencies is also becoming more difficult, at least in California (Griggs and Patsch 2019) but also in a number of other states. Coastal communities and cities are already experiencing the impacts of rising seas and more will experience these impacts in the decades ahead. Many cities in California are beginning to discuss, consider, and plan for how they will adapt to higher sea levels, but not without controversy, especially concerning managed retreat. However, over the long run, they all will respond through relocation or retreat of some sort, whether managed or unmanaged. Sea level rise will not stop at 2050 or 2100. Effective adaptation will require a collaborative process involving many stakeholders, including coastal home and business owners, local governments, and state permitting agencies in order to develop and implement policies, plans and pathways for deliberate adaptation to the inevitable future. For many reasons, this is a complex problem with no easy or inexpensive solutions, but the sooner the science is understood and all parties are engaged, the sooner plans can be developed with clear trigger points for adaptive action, ultimately relocation or retreat.

ASBPA members have access to a full digital edition of Shore & Beach. Become a member now to get immediate access.