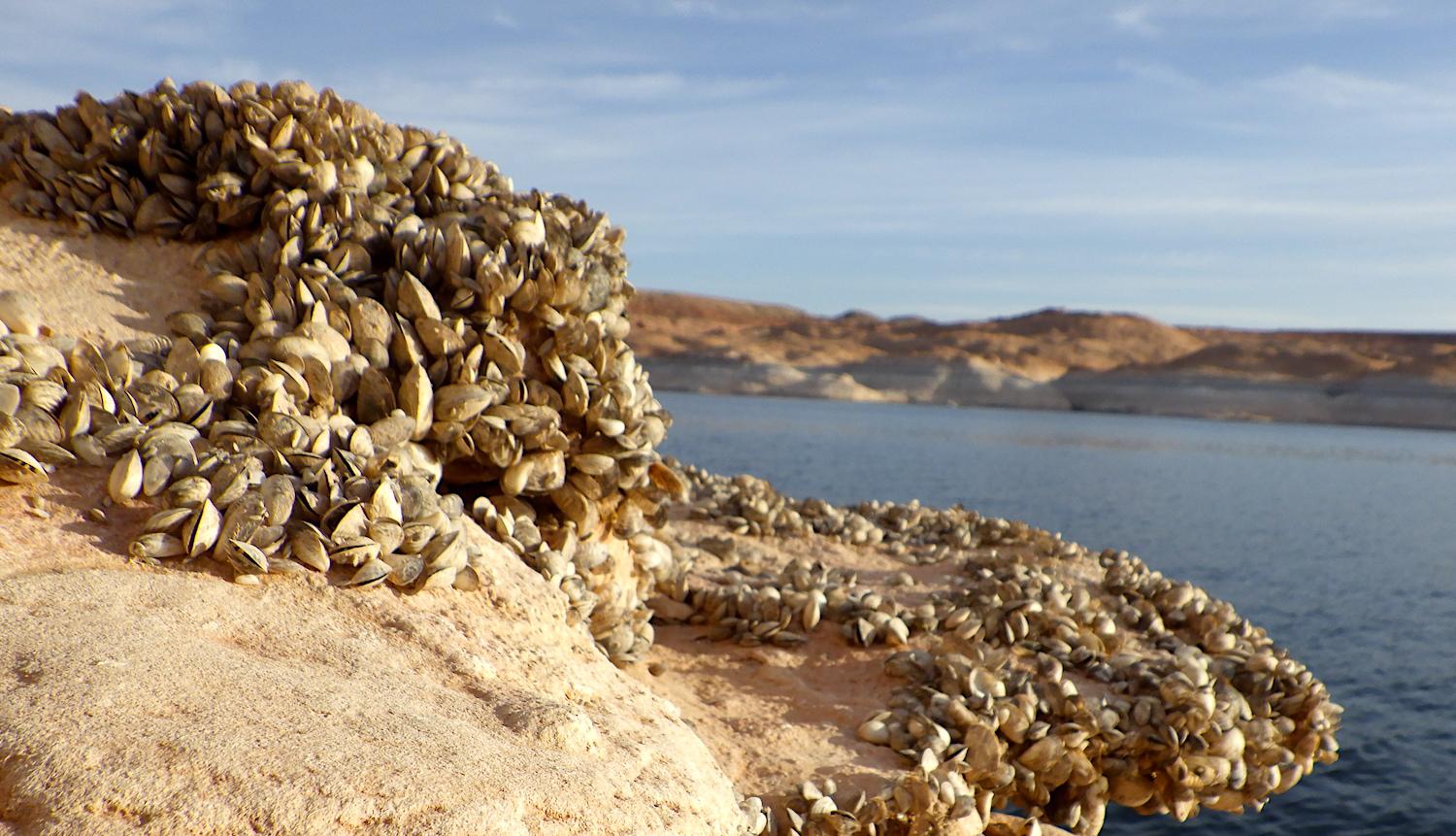 US - Traveler Special Report: The Invasion Of The National Park System

Rising 30 feet and more above the blue waters of Lake Powell, the gray, crusty band of mussel shells reflects an invasion that has swept through the watery ecosystem practically unimpeded.

Rising 30 feet and more above the blue waters of Lake Powell, the gray, crusty band of mussel shells reflects an invasion that has swept through the watery ecosystem practically unimpeded.

Quagga shells, an Asian native brought to North America in the ballast of ships, are cemented to the sandstone walls that cradle the hallmark of Glen Canyon National Recreation Area in southern Utah and northern Arizona. Skeletal evidence of the invasion has been revealed by the lake's dropping pool that literally left the invaders high and dry.

In a small handful of years since the species was discovered clinging to boats and dock timbers at the NRA’s Wahweap Marina, the small, sharp-edged shells have become about as ubiquitous as the “bathtub ring” that discolors the ruddy sandstone and reflects the dropping lake level caused by a long-running drought.

The mussels affect both the ecosystem of Lake Powell and the recreational pursuits of many who come to fish, powerboat, Jetski, and simply cool off during the hot summer months. But the invasion, and the ecological and economical impacts the mussels cause, is not the only one confronting the National Park Service as it struggles to preserve natural resources – plant, animal, fish, and fowl – across the National Park System.

Enabling the rise of invasive species in some of the parks is the changing climate. According to a U.S. Geological Survey study, warming conditions along the country’s southern border is allowing “a number of tropical plant and animal species [to] enlarge their ranges to the north. They include insects, fish, reptiles, amphibians, mammals, grasses, shrubs and trees. Among them are species native to the U.S. such as mangroves, which are tropical salt-tolerant trees, and snook, a warm water coastal sport fish, and invasive species such as Burmese pythons and buffelgrass.

“The change is likely to result in some temperate zone plant and animal communities found today across the southern U.S. being replaced by tropical communities,” the study added. “These changes will have complex economic, ecological and human health consequences, the study predicts. Some effects are potentially beneficial, such as expanding winter habitat for cold-sensitive manatees and sea turtles; others pose problems, such as the spread of insect-borne human diseases and destructive invasive species.

Many parks are being impacted by invasive species, and not just those along the southern border. Some invaders were actually imported to the United States to help combat native species, such as Indian mongoose brought to Hawaii to battle rats in sugarcane fields, while others include domesticated species gone wild, such as donkeys and burros in such national parks as Death Valley, Grand Canyon, and Virgin Islands.

“I think all of the parks are at risk for invasive species, and this is regardless of whether or not it is a park whose mission is focused on natural resources or if it's a park whose mission is focused on cultural resources,” said Jennifer Sieracki, the National Park Service’s invasive animals program coordinator. “Invasive species will impact not only the environments, but also cultural resources, infrastructure, and public safety and health as well as wildlife health.”

In the coming months, a team of National Parks Traveler writers -- Rita Beamish, Patrick Cone, Kim O'Connell, and Lori Sonken -- will focus on problems invasive species have created in the parks, the economic toll they’ve exacted, and the efforts by the National Park Service and other agencies and stakeholders to slow the invasions and mitigate the damages they’ve created.