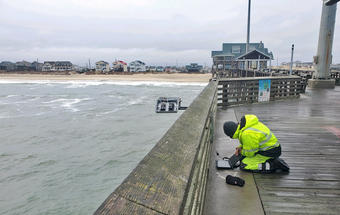 The 2021 Atlantic Hurricane Season starts June 1 and runs through November 30, and the U.S. Geological Survey is prepared to provide science that can help guide efforts to protect lives and property if a major storm makes landfall this season.

Tropical storms, hurricanes and other large coastal storms can impact seaside and inland communities and ecosystems with high winds, storm surge, erosion and flooding. These forces can destroy buildings, roads and bridges and reshape the nation’s coastline.

When a major storm threatens to make landfall in the U.S. or its territories, the USGS provides comprehensive scientific capabilities and information that decision-makers, emergency responders and communities can use to help them prepare, cope with and recover from a storm. This includes the USGS’s ability to forecast coastal change; track storm surge, river and stream levels and flow; capture high-resolution ground elevation and topographic data; create detailed maps that can be used by disaster teams responding in the aftermath of storms; measure coastal and inland flooding across entire regions; and determine the extent floodwaters may have spread non-native species.

Before a storm’s expected landfall, USGS coastal change experts forecast how a storm may reshape the coastline using a sophisticated system they developed called the Total Water Level and Coastal Change Forecast model. The model provides detailed forecasts of a strong storm’s likely effects on sandy beaches along the Atlantic and Gulf coasts.