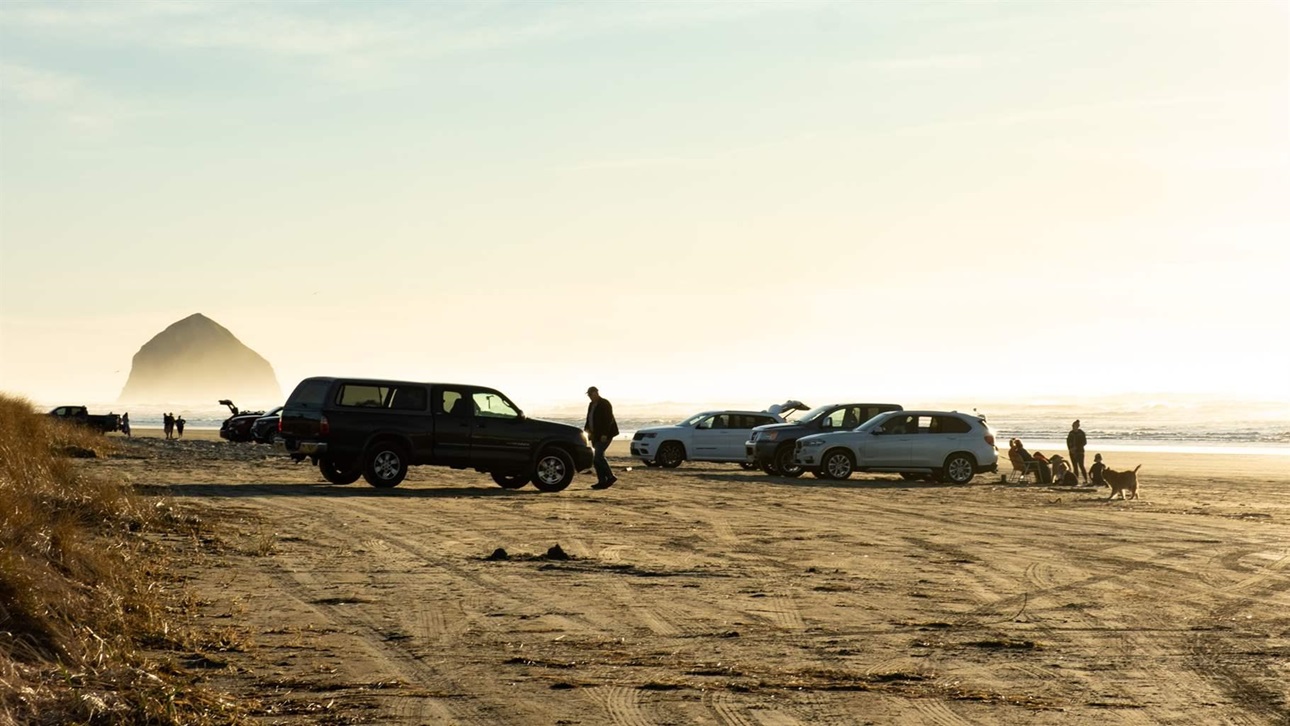 PACIFIC CITY, Ore. — To access the beach, Nicole Boulden eased her all-wheel drive Dodge Durango from the highway down a steep, rock-strewn access road toward the ocean. Behind her, Boulden's friend Kari Layman, 47, drove a Dodge Caravan very carefully down the same path.

"We take it kind of slow," Layman said.

They parked in a wind-sheltered cove on the Oregon coast where their children could play and their teenagers could sneak away. Then, they unfolded beach chairs and a sun shelter, and leashed their dogs to the Durango. Only a handful of other vehicles were in view.

To the south, they could see one of the iconic haystack rock formations of the Oregon coast. All around was the roar of the Pacific Ocean. It was a bright, sunny Friday afternoon in early June, and the weekend beckoned. Layman, a native Kansan who embraced the beach when she moved to Oregon five years ago, was at peace.

"If I'm feeling really stressed, I think: 'I need to go to the coast,'" Layman said. "The sound of the waves, it's relaxing and also refreshing. I always feel better after a day at the beach."

But accessing this sort of scene by car is increasingly difficult in states with beaches, a trend sped up by the pandemic. In California, the state's Coastal Commission recently announced plans to phase out vehicular access at its remaining drive-on beach state park, Oceano Dunes State Vehicular Recreation Area, along the central coast near San Luis Obispo.

On Florida’s Atlantic coast, officials in Amelia Island decided in 2020 during the pandemic to restrict vehicular access to daytime driving and residents only—and then kept it that way. And just south of where Layman and Boulden parked for the day recently, the Oregon State Parks and Recreation Commission decided to close a popular beach to driving, in part because of overcrowding.

States must balance the demands of short-term tourism that supports local economies with the desires of permanent residents, many of whom don't want cars or partygoers to interfere with their view or their enjoyment of a quiet walk along the ocean. There are also the competing needs of working fishers and shellfish harvesters, as well as the environmental stress of cars on nesting turtles, birds and other marine life.

And driving itself can damage dunes and other natural formations that protect coastal communities from storms. Many states, particularly those on the East Coast with fragile sea turtle populations, have faced legal challenges from conservation groups over the environmental damage caused in part by beach driving.

"Certainly driving on the beach has historically been a recreational opportunity for some communities, but it also infringes on other uses," said Derek Brockban, executive director of the Coastal States Organization, an advocacy organization that helps states with coastal management policy. "Managing public use on our coast is a real challenge. There's a lot of different dynamics at play."

A smattering of coastal states allow beach driving. In states such as New Jersey and Massachusetts, it's allowed only by permit and restricted to a few locations, mostly for fishing. Conditions vary, but many beaches—particularly on more remote coastlines—often require four-wheel-drive vehicles or advanced driving skills.

Citing environmental concerns, the California Coastal Commission this spring decided to phase out off-road vehicular access to Oceano Dunes State Vehicular Recreation Area. The beach, the only coastal state park open to cars, draws thousands of all-terrain vehicles a day and an estimated 1.5 million visitors each year. The commission's decision to ban off-road driving came after a 12-hour public meeting that drew more than 200 virtual public comments. Off-road enthusiasts have filed a lawsuit challenging the changes, which are expected to be phased in over the next three years.