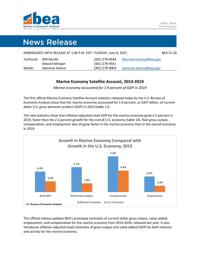 Report: Tourism, recreation accounts for $235B in sales

Apparently, there's no feeling blue about the U.S. blue economy.

The segment of the nation's economy related to its oceans and the Great Lakes flexed its economic muscle in 2019 in sales ($665.7 billion), jobs (2.4 million) and its contributions to the overall U.S. gross domestic product ($397 billion), according to a report released Tuesday by the federal Bureau of Economic Analysis.

The report was developed from data compiled by National Oceanographic and Atmospheric Administration and the Bureau of Economic Analysis. Both come under the U.S. Department of Commerce.

Officials from those agencies said the report reflects the surging importance of the nation's marine economy within the overall U.S. Economy.