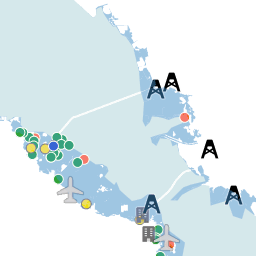 US - Maps: See Which Bay Area Locations Are at Risk From Rising Seas

The bay’s high tide level is going in one direction: up. Models used in the state's latest sea level rise assessment, from 2017, include an upper range defined in terms of statistically less probable events.

They show the bay could rise by up to 1.9 feet by the year 2050 and 6.9 feet by the end of the century, which are greater than the levels shown in the two maps on this page. But it could get even worse: Cities preparing for future flooding also have to worry about several additional feet of water crashing against their shorelines during a bad storm.

Already during storms, East Palo Alto and other cities along the shoreline experience coastal flooding and erosion, which will only be exacerbated by the coming rise in sea level.

“Rising seas is one of the most certain of the effects of climate change,” said Mark Stacey, a UC Berkeley environmental engineer. “We know much of that is already baked in, and we know the seas are going to continue to rise at pace and perhaps accelerate in the coming decades.

Differences in scientific modeling scenarios before the year 2050 are minor, but they diverge significantly after mid-century depending on the trajectory of greenhouse gas emissions, which human beings will determine, and the fate of ice sheets in Greenland and Antarctica