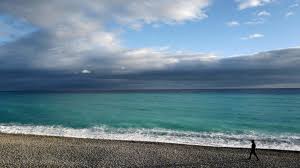 I freaking love the beach. It is my place of solace come summertime and my preferred destination come vacation time. So it breaks my heart to share this news: Half of our world’s beaches could be gone by the end of the century.

A new study published on Monday in Nature Climate Change shows the way climate change, rising sea levels, and erosion are set to transform our coastlines over the next 80 years. The changes vary depending on where in the world you look, but the results are worrisome for those who live along or enjoy the coast. Melting glaciers and rising heat could destroy beaches that not only serve as sources of tourism dollars but also help protect coasts from cyclones and storms.

The authors of this paper—who hail from Italy, Portugal, Spain, and the Netherlands—analyzed 35 years of coastal satellite data to see how shorelines have evolved. They then used climate models to look at sea level rise and simulated what would happen to beaches over the rest of this century. The team went even further to simulate more than 100 million storm events to quantify the coastal erosion that could occur globally as a result.

Study author Michalis Vousdoukas, a researcher at the European Commission, told Earther in an email that they pursued the study because this information was missing. And it’s vital stuff: About 10 percent of the world’s population lives in coastal areas that sit a mere 30 feet above sea level, per the United Nations. And about 40 percent of the population live some 60 miles from the coast. So the implications of this go far beyond recreational use of beaches. The loss of beaches affects people’s lives and livelihoods.