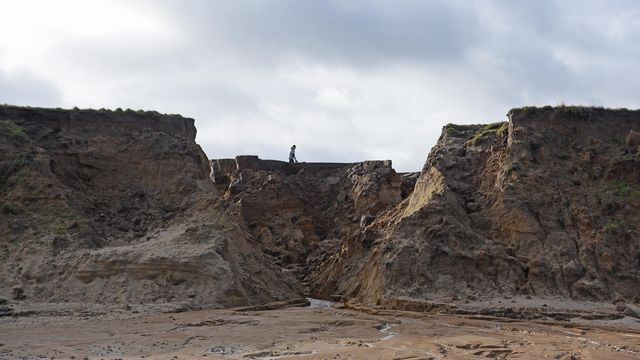 A campaigner working to protect a Norfolk village from falling into the sea has made an emotional plea for more to be done to save it.

The rate at which Happisburgh is being lost to the sea is increasing, but the village is not just being attacked by the waves -  surface water running off the land is also causing the cliffs to crumble.

The village in North Norfolk, has long been facing the threat of coastal erosion and climate change. In recent weeks the cliffs along the coastline have been the location of a number of landslides and cliff falls, leading authorities to issue several safety warnings.

A Second World War pillbox is now perilously close to the cliff edge and in November a landslide took out a portion of the coastal footpath.

But the recent spate of land loss has not been caused by the sea but surface water running off the fields which has saturated the cliffs.

Malcolm Kerby, one of the co-founders of the village's Coastal Action Group which campaigned for improved coastal defences around the country and remedies for communities affected by coastal erosion, said the village was being pincered by the land and the sea.