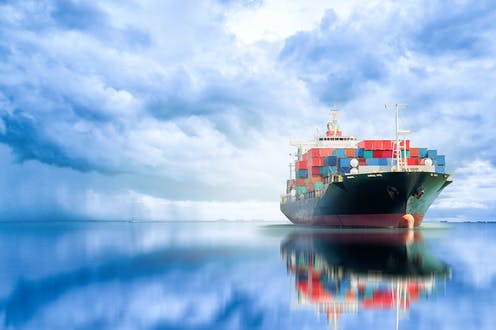 UK - Protecting ocean habitats isn't easy when industries are booming – but can they be part of the solution?

The MV Wakashio ran aground on a coral reef in Mauritius in late July 2020, leaking 1,000 tonnes of oil into the crystal blue waters of a lagoon, threatening mangrove, seagrass and mudflat habitats. Since then, dozens of dead dolphins and porpoises have washed ashore. Anger has grown and sadness has deepened.

But this is a different story – it starts two years ago in the same place in Mauritius, and I am walking down a muddy path in a mangrove forest. A guide is telling me about how the communityhas removed invasive species, cleaned up waste and planted mangroves.

She points out a knee-high seedling growing by the side of the path. “This is a critically endangered species,” she says. There is no fence or sign, but someone has placed a rock next to it – perhaps to keep anyone from accidentally stepping on it. Here, that seemed to be enough.

This is in one of 33 barachois along the island’s coastline. In their simplest sense, barachois are simply coastal lagoons, but in Mauritius they have been modified by local communities into something unique. Over 200 years ago, they built permeable stone walls within the lagoons, creating something akin to artificial tidepools, where fish could be reared among the mangroves in brackish water fed by the tides. A reliable food source was born, biodiversity increased, new livelihoods were created, and the glue that held things together was the community’s ability to act as stewards of their barachois.

But what does stewardship mean on a global scale? After all, the ocean is the beating heart of a dozen global industries, the Earth’s climate system, and the biosphere. The MV Wakashio was just one of the 50,000 vessels, crewed by 1.2 million seafarers, that operate around the world, transporting nearly 90% of global trade.

In the last few decades, many ocean-based industries have grown dramatically. Seabed mining scarcely existed in the 20th century, but since 2001, 1.4 million square kilometres of seabed have been leased for exploration. Over roughly the same period, there has been a fourfold increase in the volume of goods transported by shipping.

With so much going on in the ocean, what’s the equivalent of putting a rock next to places like the coral reefs of Mauritius so they don’t get stepped on?

Governments need to collaborate on policies and legislation that set high standards for sustainable and fair practices. And they need to ensure they’re enforced. But a global appetite for multilateralism seems to be fading, and even the international processes that are moving are going nowhere fast.

One example is a treaty aimed at ensuring the conservation and sustainable use of biodiversity in areas beyond national jurisdiction (ABNJ). While much of the ocean is within national jurisdiction and governed by states, most of it is not. Collectively, ABNJ forms a vast area covering nearly half the Earth’s surface, nominally governed by a patchwork of international agreements – one for seabed mining, one for shipping, one for fisheries, and so forth – but with crucial gaps. For example, there’s no global mechanism to create protected areas here, and access to genetic resources – among the most promising sources for the development of new drugs and other innovations – is unregulated.

The UN General Assembly started a process in 2004 to fill some of these holes in ABNJ. Despite progress, a treaty that would help to conserve life in half the planet remains elusive.

In the meantime, the catalogue of statistics about damage to the ocean grows, with the MV Wakashio oil spill being just the latest addition. While thousands of local communities around the world have acted as stewards of their coastlines for generations, they are now embedded within one global community, with the ocean as the connecting element.

If governments have struggled to prevent degradation of the ocean, who else can help? NGOs can make a valuable contribution, but they don’t have the authority or resources to reshape ocean governance on their own. So what about the biggest users of the ocean? Can transnational corporations become responsible ocean stewards?

It’s easy to be sceptical. Decades of corporate social responsibility have yielded mixed results, and some transnational corporations have a record of systematically lobbying to weaken social and environmental standards. Nice words are not going to shift the needle.

But it’s becoming increasingly clear that caring for the environment has little to do with altruism. The long-term viability of ocean industries depends on a functioning biosphere, and the growing number of voluntary initiatives show that corporations can be a positive force.

In 2020, the United Nations Global Compact (the world’s largest corporate sustainability initiative) published a ten-year road mapwith ten goals for companies that include a commitment to fully traceable seafood, decarbonised shipping, and ending the flow of plastic into the ocean. Elsewhere, some seafood companies are now pushing governments to follow scientific advice and reduce fishing quotas to sustainable levels, and more than a third of global funding for shipping is now tied to public reporting on greenhouse gas emissions and reduction targets. If actions like these become a point of pride among corporations and increasingly associated with time-bound targets and public reporting, perhaps momentum will grow.

A final memory from my time in Mauritius. I am in a boat out in the very lagoon that has recently been flooded with oil. The waters are blue and clear, and I can see bright glimmers of reef fish through the ripples. Far out, waves are crashing over the outer reef that encircles the lagoon – and there, stuck on the outer reef, is the twisted metal remnant of a shipwreck.