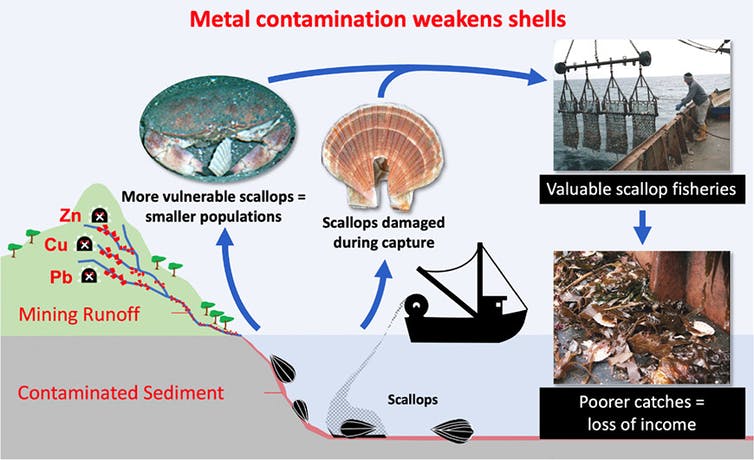 Shellfish such as scallops, mussels and oysters – bivalve molluscs – readily take up tiny specs of metals into their tissues and shells.

In sufficient concentrations this can harm their growth and survival chances, and even threaten the health of any human who eats their contaminated meat. Such shellfish provide one-quarter of the world’s seafood, so the impact of pollution from the “heavy metals” such as lead, zinc and copper, is hugely important.

We recently investigated the effects of metal pollution on the great scallop, Pecten maximus, for a new scientific study. This is a common species which supports the most valuable fishery in England and the third most valuable in the UK overall.

We first discovered these effects of pollution by chance. While carrying out routine stock assessment surveys around the Isle of Man, a self-governing island that lies between Britain and Ireland, we noticed that scallops found on the Laxey fishing ground off the east coast were much more likely to have lethally damaged shells than scallops from elsewhere.

Laxey is famous for the world’s largest working waterwheel, a spectacular example of Victorian engineering used to pump water from a mine which produced lead, copper, silver and zinc. The mine closed in 1929, but its legacy is that sediments in the rivers, estuary and sea waters around Laxey are unnaturally high in metals.