International
Images released by Kent Fire and Rescue Service reveal the extent of damage to one house in particular in Surf Crescent, Eastchurch, with part of it hanging in mid air. 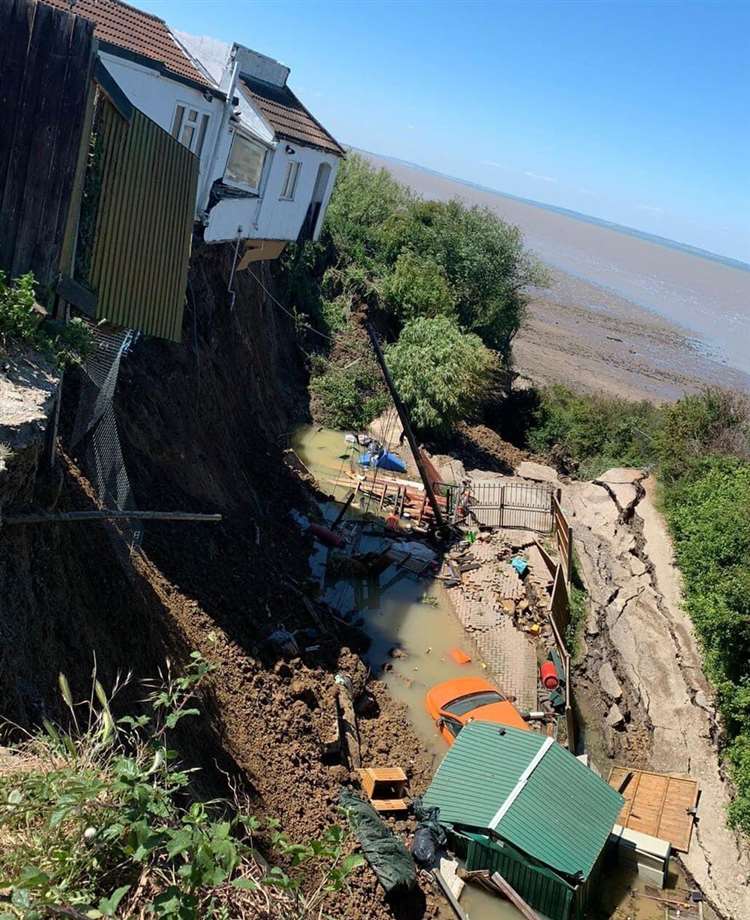 UK - Living on the edge: Coastal home owners being treated like outcasts

Standing at the garden edge of a clifftop home on the Isle of Sheppey in Kent, I am warned to step back. The cliff, like many on the UK’s coast, is eroding and in danger of collapse. The home belongs to 72-year-old Malcolm Newell. He warns me the ground beneath my feet could give way at any moment. He is not exaggerating.

Two years ago, his neighbour saw her £195,000 family home destroyed in a landslide. All that now remains of this once impressive five-bedroom property is the rump of an annexe and swimming pool. What is happening on the Isle of Sheppey provides an alarming snapshot of the future. Some 200,000 coastal properties countrywide are at risk of land erosion over the next 30 years, according to research from the Tyndall Centre at the University of East Anglia. Victims of rising sea levels – a direct result of climate change.

Danger: The house next to Malcolm Newell was destroyed in a landslide two years agoJust last month, coastal erosion in Suffolk forced a couple to abandon their £2million clifftop holiday home in the popular village of Thorpeness after their back garden was swept away – leaving it worthless. In August, 4,000 tons of stone tumbled into the sea along a 1,000ft stretch of coastline near Sidmouth in Devon. Retired woodturner Malcolm fears his £150,000 three-bedroom home and 40ft garden could plummet into the sea at any time. Yet he is not frightened – just furious.

He is angry that the local council has so far refused to fund a £1million sea defence barrier, condemning his and 47 other homes in the village of Eastchurch to end up in the sea. ‘We are being treated like outcasts,’ he says. ‘When my neighbour’s house collapsed, some jobsworths came round and told me to leave as it was too dangerous to stay

.’He adds: ‘They said I would be paid £6,000 to have my house demolished. When I said no, they ordered me to get out. I refused – it would have left me homeless without a penny. I am going nowhere. If the house slides down the cliff, I will live out my days on the beach.’

Malcolm moved to Eastchurch in 2001 as a result of his wife’s poor health. She died five years ago, leaving six children, 14 grandchildren and 11 great grandchildren – many of whom still love coming to the village and enjoying the sea. Both Swale Borough Council and the Environment Agency have agreed on a ‘no active intervention’ stance when it comes to coastal defences. Locals believe a concrete barrier for the 700ft stretch of front required to save the community would cost no more than £1million. Yet the council disagrees. It claims what is necessary is spending £24million – to protect homes, including 1,000 caravans, on a fourmile stretch of the coast.

Sadly, wooden ‘groynes’ installed in the Victorian era to stop coastal drift erosion have either been destroyed or stolen – and not replaced. Environment Agency chief executive James Bevan says ‘there is no coming back for land that coastal erosion has taken away’. A £5.2billion Government ‘flood and coastal erosion plan’ announced two years ago to help communities over the next decade has so far only earmarked £140million to provide ‘benefit to households at risk of coastal erosion’ – with most of the rest going on inland flood defences. With large swathes of coastline in Norfolk, Suffolk, the Yorkshire East Riding, parts of Wales, Devon and other areas of Kent under threat, funds to support coastal communities will be thinly spread. Coastal properties are not only being abandoned by local authorities, but by mortgage lenders and insurance companies.

The dramatic slip in Sidmouth, Devon, earlier this yearMalcolm is one of thousands of homeowners unable to get a mortgage on a seaside property and struggles every year to obtain buildings insurance. Flood victims whose homes and businesses are ravaged in storms are bailed out by a Government-backed ‘Flood Re’ scheme. This is designed to help half a million people living in flood-risk areas get insurance cover. The £180million-a-year service is funded by the insurance industry and allows homeowners to claim against damage or destruction caused by floods – but does not include coastal erosion.

Malcolm Tarling, spokesman for the Association of British Insurers, says: ‘If you have a property where the risk of storm damage exists, you should still be able to get insurance cover – but you are not going to be covered for coastal erosion.

‘People looking to purchase a house by the sea need to understand this.’ The stretch of coastline that threatens Malcolm Newell’s home was not expected to erode at such a fast rate until a giant 20ft wide sinkhole suddenly appeared in May 2020.

Locals believe burst water pipes may have made the problem worse in the clay-rich coastal soil. The local council ordered residents not to fill the hole. Malcolm’s experience provides a stark warning for those considering a home near the coast – the vagaries of the sea are unpredictable and potentially financially ruinous. Think carefully before buying home by sea  A survey will highlight any potential problems with a property before you buy. You might pay anything from £500 for a basic condition report to £750 for a homebuyer survey, right up to £1,500 for a full buildings survey.

Those considering a coastal property should opt for the latter as it includes an in-depth foundations study. If you are not a cash buyer, be aware that mortgage providers are nervous about lending on coastal properties. Home insurance providers are also not keen because the risks to the property are higher. Don’t allow the heart to rule the head. If in doubt, get opinions from level-headed friends – and someone involved in the property or building industries. Make numerous visits looking for reasons not to buy. You can bag a bargain when it comes to buying a home close to the sea, but you are effectively playing roulette.

For example, the owner of the £195,000 five-bedroom family home in Eastchurch that fell into the sea two years ago purchased it for cash a couple of years earlier. Coastal erosion was not expected to be a problem for 40 years.