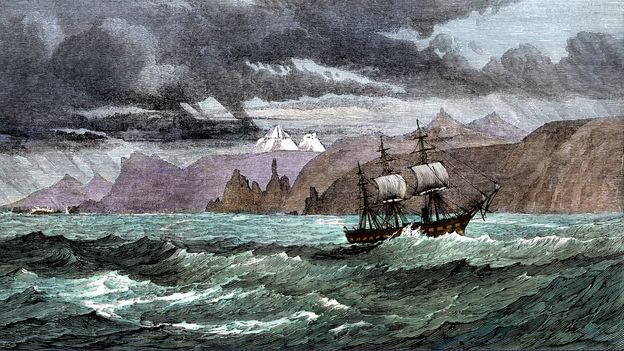 The 3.5-year voyage to the furthest corners of the globe reshaped marine science and permanently changed our relationship with the planet’s oceans.

In the foyer of the National Oceanography Centre in Southampton, England, stands a ship’s painted figurehead. It towers well above head height and depicts an armoured knight with a silver chest plate, a raised visor and a thick handlebar moustache. The knight’s eyes have a faraway gaze in them – and well they might. This wooden statue is the sole remnant of a square-rigged ship that once embarked on a three-and-a-half-year voyage to the furthest corners of the globe, reshaping marine science, unearthing all manner of underwater oddities and permanently changing our relationship with the planet’s oceans. The vessel’s name was HMS Challenger.

The journey was no simple A-to-B cruise. Between December 1872 and May 1876, the figurehead on the ship’s prow felt the salty spray of both the North and South Atlantic Oceans as well as vast swathes of the Pacific, even venturing below the Antarctic Circle. The circuitousness of its route paid off. At the voyage’s conclusion, one of those on board, the prominent naturalist John Murray, declared it “the greatest advance in the knowledge of our planet since the celebrated discoveries of the 15th and 16th Centuries”. It was some achievement for a ship that was only ever supposed to be a bit-part in a naval fleet.

Built in England’s now-defunct Woolwich Dockyard and first launched in February 1858, HMS Challenger was constructed as a wooden, steam-assisted Royal Navy corvette, or warship. It measured some 61m in length. Just weeks earlier, the completion nearby in London of Isambard Kingdom Brunel’s colossal SS Great Eastern – an iron-hulled steamship more than 210m long – had been reported across the globe. The arrival of the Challenger, by contrast, made a relatively tiny splash. This wouldn’t always be the case.