International
Inert granite boulders have already been placed into the English Channel by Greenpeace as part of a new bottom trawler exclusion zone in the Offshore Brighton Marine Protected Area and now the conservation charity wants to do the same off Cornwall (Image: © Suzanne Plunkett / Greenpeace) 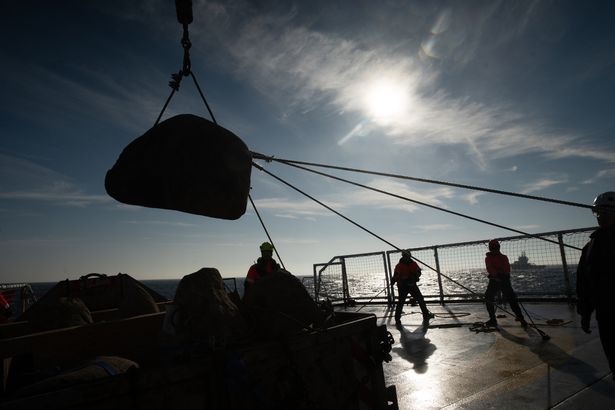 It's about stopping bottom-trawling in marine protected areas

An international environmental and conservation charity is planning to drop huge boulders onto the sea bed off Cornwall in a bid to stop what it calls destructive industrial fishing from further damaging one of Britain’s marine protected areas.

Greenpeace UK aims to create a rocky barrier on the seabed that will stop bottom-trawlers who would otherwise snag their nets on the boulders. In the coming weeks, Greenpeace’s ship Arctic Sunrise will be sailing to the South West Deeps (East), a Marine Protected Area (MPA) almost 200 kilometres off the Cornish coast, to make a portion of it off-limits to bottom-trawling.

Greenpeace said bottom-trawling is the most destructive type of fishing as it drags weighted nets across the seafloor, tearing up marine habitats while at the same time the South West Deeps is one of the most heavily fished so-called Marine Protected Areas in the UK.

According to Greenpeace between January 1, 2021 and July 15, 2022, the South West Deeps was fished in for nearly 19,000 hours by 110 boats with bottom-trawlers spending more than 3,370 hours fishing in the area over the period. The majority of industrial fishing vessels in the South West Deeps are from France (53%) followed by Spain (30%) and Great Britain (9%).

Pat Venditti, Greenpeace UK’s executive director, said: “This is a last resort to save the UK’s marine life; we would prefer that the Government did their job of protecting the oceans properly. But we’re taking matters into our own hands for the third year in a row because the Government is still failing to stop destructive fishing from decimating marine life in our so-called Marine Protected Areas.