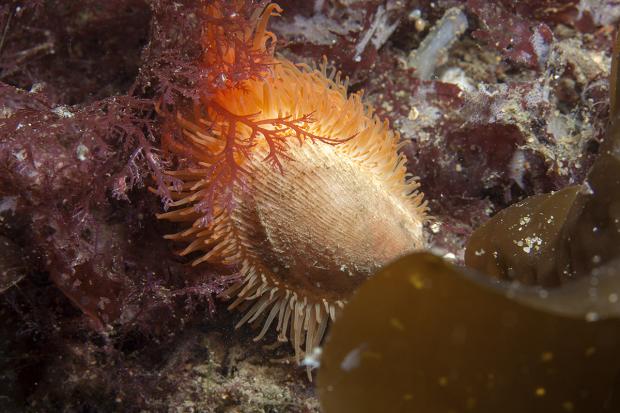 CONSERVATIONISTS have hailed the discovery of a previously-unknown reef of endangered sea creatures in the Clyde as “extraordinary”.

The extensive bed of flame shell mussels, which covers an area the size of 30 tennis courts off the coast of the isle of Arran, is only the second to be found in the Clyde marine region and hints at the area’s recovery from decades of trawling.

It was spotted by divers working with the Community of Arran Seabed Trust (COAST) – a marine conservation charity which campaigned to have the Firth of Clyde around the island designated a Marine protection Area (MPA).

Flame shell mussels take their name from distinctive neon orange tentacles protruding from their shells, and form large mats on the seabed which provide habitats for other species.

These ‘living reefs’ knit the seabed together to build a nest which supports a large variety of other marine life, enhancing biodiversity in the area.

Research on the only other known flame shell reef in the Clyde, at Loch Fyne, recorded 265 different animal species within samples of the flame shell bed. Professor Jason Hall-Spencer, of Plymouth University, described the discovery of the new flame shell bed off Arran as "absolutely amazing and very welcome news".