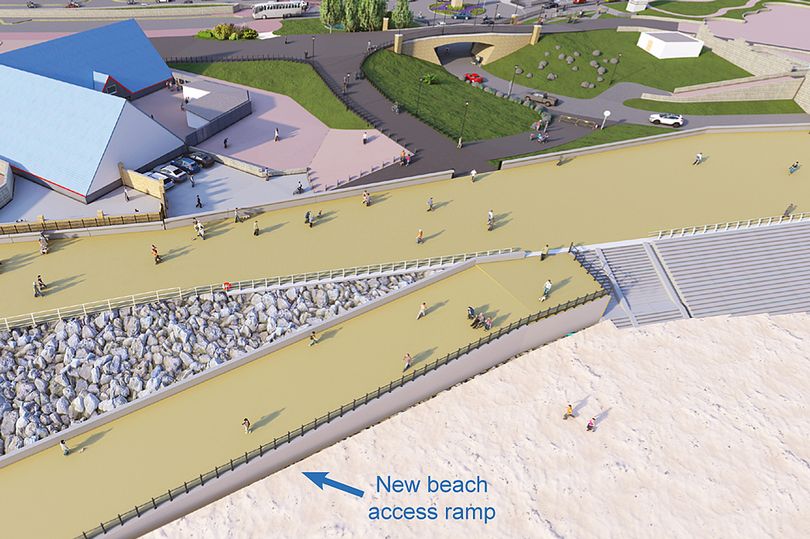 A wider, raised promenade, backed by a new sea wall, form part of new plans to ease coastal flooding in Rhyl over the next century.

Denbighshire Council has launched a consultation on multi-million pound proposals to improve coastal defences in the seaside town between Drift Park and Splash Point.

If they go ahead, the project will dramatically alter the central Rhyl seafront in order to protect around 600 homes and businesses.

To raise the promenade, and widen it, a concrete stepped barrier (revetment) will be built along a three-quarter kilometer stretch between Drift Park and the SeaQuarium.

Further east, from Splash Point to the SeaQuarium, rocks and boulders will be placed against a 1.45km stretch of existing coastal defence structures.

Along this section, it’s possible the entire beach level may be lowered in future, in which case existing access points will be extended through the rocks.

A 28-day consultation on the proposals was launched yesterday and will run until February 9.

This will give residents and businesses the chance to comment ahead of a formal planning application.

Denbighshire Council stressed the scheme still depends on “availability of funding” as well as securing the relevant planning and environmental consents.

For the scheme to go ahead, it will need be partially funded by the Welsh Government as part of its Coastal Risk Management Programme.

If approved, construction is due to start in autumn/winter 2022 and is expected to take two-and-a-half years.

Cllr Brian Jones, lead member for waste, transport and the environment, said the council understood the promenade’s importance to Rhyl’s identity and economy.

He said: “We have already engaged with the public and taken the views expressed into account when developing these plans.

“We are again asking members of the community to have their say and take part in the pre-application consultation.”