International
Technicians check the hull and interior of the Mayflower Autonomous Ship at its launch site for it's first outing on water since being built in Turnchapel, Plymouth south west England, Monday, Sept. 14, 2020. The autonomous ship aims to cross the Atlantic fPlymouth, England, to Plymouth, Ma, USA, in April 2021, to become be the first totally autonomous ship to cross the Atlantic ocean without any help from the outside. Alastair Grant / AP Photo 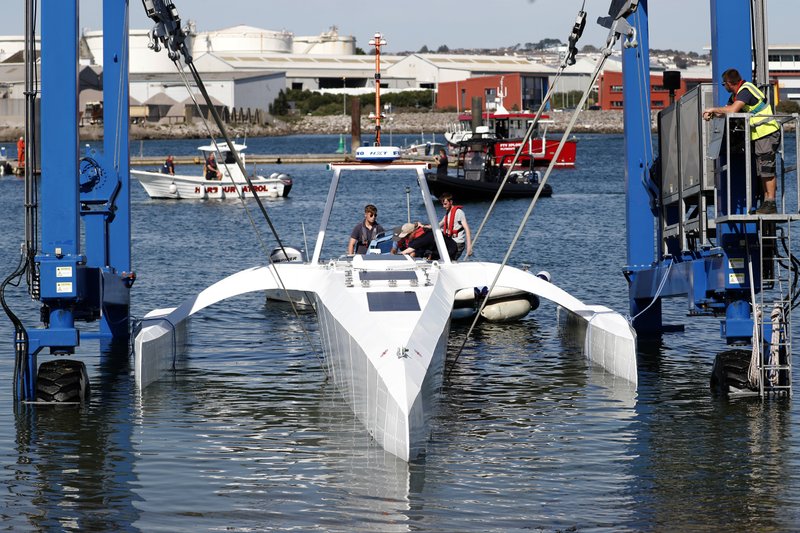 UK - 400 Years Later, a New Mayflower Will Sail Without Humans

PLYMOUTH, England (AP) — The Mayflower is taking to the water in Plymouth harbor.

It’s not the ship that left this southwest England port 400 years ago carrying Pilgrim settlers to America. The sleek vessel being readied Tuesday for its official launch has no passengers, no crew — but like its predecessor, an ambitious mission.

The 50-foot (15-meter) trimaran has “no one on board, no captain, no place to eat, no place to sleep,” said Brett Phaneuf, co-director of the Mayflower Autonomous Ship project. “It’s sophisticated artificial intelligence that will captain the ship across the ocean.”

The ship is set to follow in its forebear’s footsteps by crossing the Atlantic from Plymouth, England, to Plymouth, Massachusetts, this time on a marine research trip. Its creators hope it will be the first in a new generation of high-tech vessels that can explore ocean regions which have been too difficult or dangerous for people to go.

Built by the nonprofit marine research organization ProMare and computing giant IBM, the vessel will be launched and christened on Wednesday, 400 years to the day since the original Mayflower left Plymouth. The ceremony will be attended by officials from Britain, the U.S. — the 17th-century colonists’ origin and destination — and the Netherlands, where the Puritan pilgrims lived in exile before their voyage.

It’s part of 400th anniversary commemorations of the voyage involving the British, Americans, Dutch — and the Wampanoag people native to what is now New England. Wampanoag stories have been marginalized on past anniversaries, but this year play a central role in events and exhibitions on both sides of the Atlantic.

Now, as in 1620, not everything has gone to plan. The Pilgrim colonists set sail for America from Southampton, further along England’s south coast, but had to stop in Plymouth for repairs before finally setting out on Sept. 16, 1620.

The coronavirus pandemic delayed construction of the autonomous ship, and the vessel’s trans-Atlantic voyage has been postponed until 2021. It will undertake six months of sea trials and short trips before setting out across the Atlantic next spring.