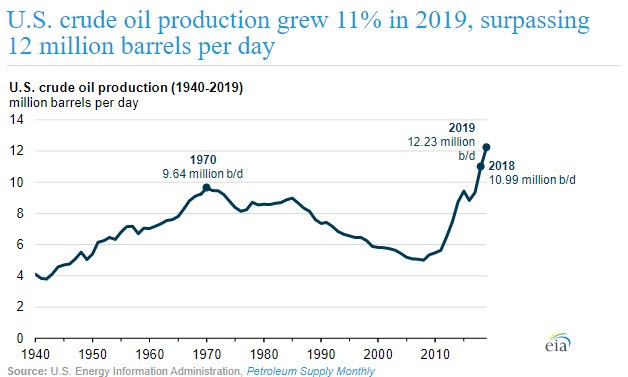 Texas continues to produce more crude oil than any other state or region of the United States, accounting for 41% of the national total in 2019. Texas crude oil production averaged 5.07 million b/d in 2019 and reached a monthly record of 5.35 million b/d in December 2019. Texas’s production increase of almost 660,000 b/d in 2019—driven by significant growth within the Permian region in western Texas—was 53% of the total U.S. increase for the year. Texas crude oil production has grown by 3.9 million b/d, or 333%, since 2010.

Several other U.S. states or regions set production records in 2019. In addition to contributing to Texas’s record production year, the Permian region drove a 248,000 b/d, or 36%, crude oil production increase in New Mexico. This increase was the second-largest state-level growth in 2019 and accounted for 20% of the total U.S. increase. In 2019, New Mexico set a new oil production record for the third consecutive year, growing by 749,000 b/d since 2010.