Gulf of Mexico
TOP SHOT - A view of the Marathon Texas City Refinery as rain from Hurricane Harvey floods a road on August 26, 2017 near Houston. (Photo credit BRENDAN SMIALOWSKI/AFP/Getty Images) 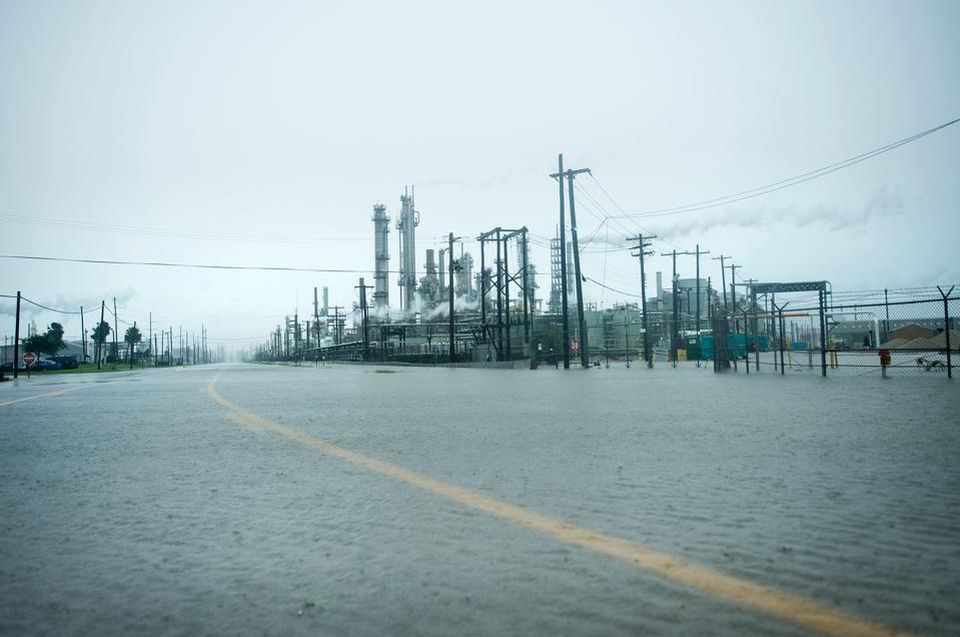 Terence O’Rourke has spent a decade warning officials a storm making landfall directly in Galveston Bay could be much worse than even Harvey.

The storm emerges over the eastern Atlantic in late August, first as a slow-moving tropical system that remains largely unnoticed in faraway Texas. It gains power as it drifts westward into warmer Caribbean waters, lashing island coastlines and leaving a trail of destruction in its wake. By the time the storm enters the Gulf of Mexico and churns toward the southeast corner of Texas, it has transformed into a category 4 hurricane with 130-mile-per-hour winds that fan out for 200 miles in every direction.

Unlike 2017’s Hurricane Harvey, which made landfall just north of Corpus Christi, the swirling behemoth slams into land some two hundred miles up the coastline near Galveston Island. As the hurricane moves inland, it functions like a giant wall of wind, pushing water north from Galveston Bay—one of the largest estuaries in the United States—into the smaller bays, rivers, and bayous that comprise the Houston Ship Channel, home of the largest petrochemical energy complex in the United States.

This is a hypothetical that Terence O’Rourke, an environmental attorney and hydrology expert with the Harris County Attorney’s Office, has been warning public officials about for the last decade. He says what comes next in the disaster scenario would become “America’s version of Chernobyl”—the Soviet nuclear power plant that melted down in 1986, killing 4,000 people over time and forcing the evacuation of nearly 50,000. The storm O’Rourke predicts could displace hundreds of thousands and create a sprawling contamination zone that stretches across Galveston Bay.

Local hurricane experts agree that a violent storm surge in the channel of at least 26 feet—a reasonable estimate for a category 4 storm that hits Galveston directly—would initially inundate densely populated, low-lying communities on the western half of Galveston Bay. Debris from those communities would then combine with thousands of shipping containers in the area, forming a destructive wall of steel and wood that would slam into thousands of chemical and crude oil storage tanks. Many tanks would be broken open by the battering ram of debris, while others would be ripped from their foundations by the water, releasing their deadly contents. A detailed inventory of hazardous chemicals around the Ship Channel remains difficult to come by, thanks to a Texas law that restricts public disclosure of information that could be utilized by terrorists. However, a 2016 Houston Chronicle investigation of the area’s dangerous chemicals revealed that communities near the Ship Channel live in close proximity to toxic substances, such as silane gas, methyl mercaptan, hydrofluoric acid, sodium sulfide, and ammonia. On at least three occasions, the investigation found, those substances have been released, killing workers and endangering nearby residents. The paper has also catalogued more than 100 toxic releases during Hurricane Harvey alone, most of them from Houston’s petrochemical corridor.

“There are thousands of chemical tanks and many refineries with products that are so poisonous, so volatile, and so explosive that the result of this could be the greatest environmental disaster in the history of the planet,” O’Rourke said from his home in Houston on a recent afternoon. “Downtown Houston could be flooded with deadly chemicals, entire communities could be displaced, and Galveston Bay would go from the vibrant ecological system that it is to something catastrophic—a giant toxic pond.”