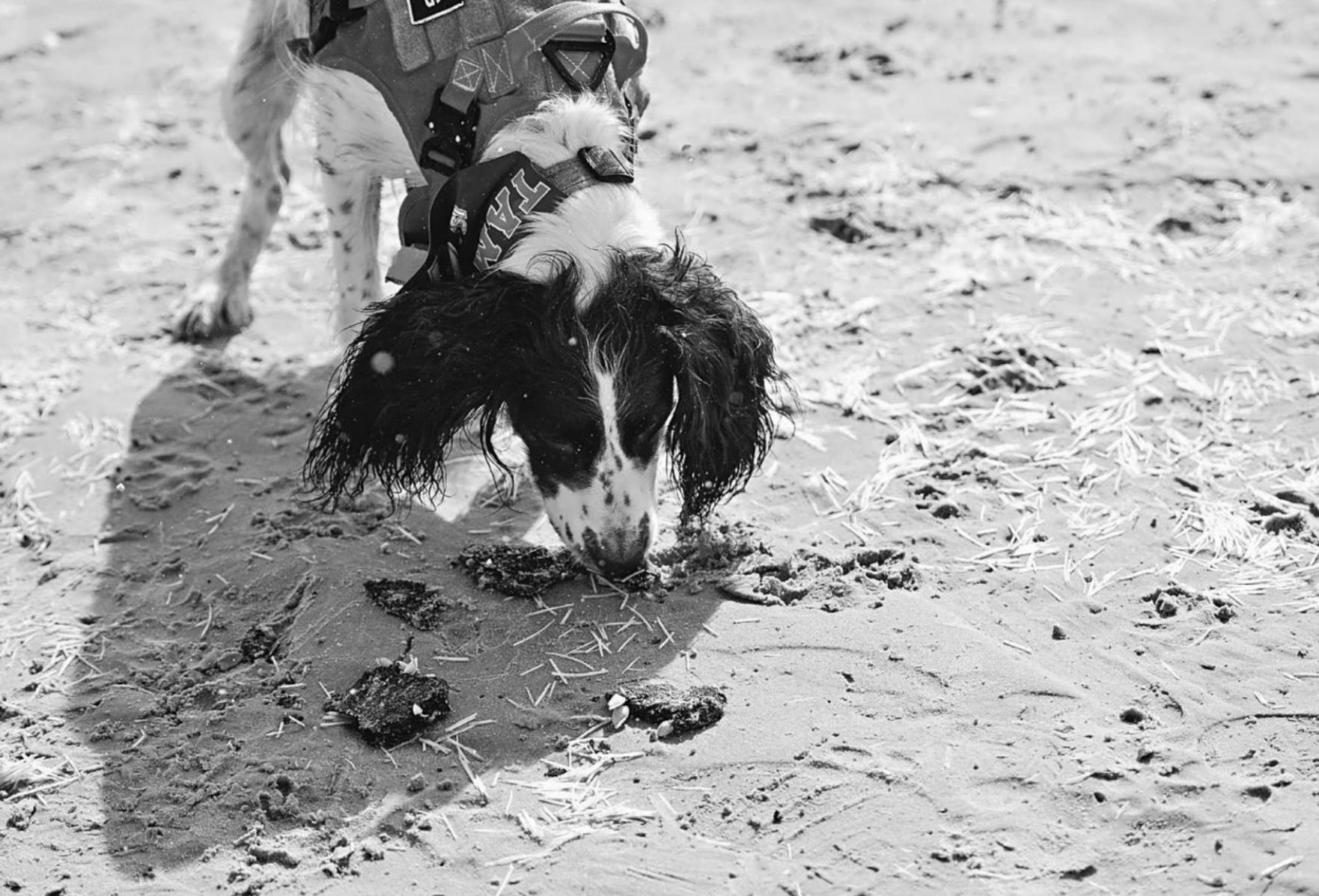 CORPUS CHRISTI – Man’s best friend has long earned its keep in service to humans when it comes to hunting, herding, providing protection, or assisting in searches.

At the Center for Coastal Studies (CCS), housed within the College of Science and Engineering at Texas A&M-Corpus Christi, a team is currently focused on training Bin to differentiate between naturally occurring weathered oil (tar balls) and fresher crude oils (example: oil spills) up to three feet below the sand. As the control canine, Poppy is taught to detect any occurrence of oil. Poppy is handled by Paul Bunker of Chiron K9 while Bin is handled by citizen scientist Mike Price who adopted the dog from Chiron K9.

“Canines are extremely precise and can detect very small quantities of oil in austere conditions,” said Aaron Baxter, CCS Research Specialist II and the principal investigator for the study. “They are fast, accurate, and cost-effective. They can be deployed via vehicles, planes, helicopters, and boats to survey locations.”

If the study is successful, it will provide the State of Texas with a novel tool to conduct oil surveys on beaches. Baxter says canines can cover large areas quickly and locate surface and buried oils better than any machine.

“There is no technology available at present that can replicate the efficiency and effectiveness of the canine,” he said. “A canine can process a 1-acre area in 3 minutes while a team of humans must dig pits every 10 meters to determine if there’s any oil.”

Baxter adds that while canines have been used for this type of work in other areas/environments, this study specifically investigates the ability for Oil Detection canines to be trained to only respond of fresh (spilled) oil and ignore any naturally occurring samples (tar balls) that wash up on Texas Gulf beaches. The program works under the guidance of the TAMU-CC Institutional Animal Care and Use Committee, which provides oversight and institutional reviews of research activities involving live vertebrates.

“The dogs wear a ‘working dog’ vest, anti-sand goggles to protect the eyes from high wind situations, and paw pads to protect against hot sand,” Baxter said. “If the conditions are not fit for a person to work in, they are not fit for the dogs either. They are also trained using positive reinforcement, so they are given treats or toys when they perform well.”

Baxter said the idea for an oil detection study is based on the pioneering work of Bunker and Dr. Nathaniel Hall at Texas Tech University.

“Paul and Nathaniel have been working to train dogs to detect specific types of crude oil in a lab setting,” Baxter said. “Our project takes dogs out of the lab into the field.”